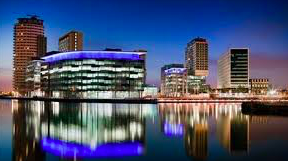 The Northern Powerhouse Partnership (NPP) said in its first report the Northern economy has the potential to benefit from £100 billion gross value added and 850,000 jobs in the next 30 years — but only if “urgent attention” is given to improving schools, training, transport, broadband, investment and the “overall level of ambition in its local decision making.”

The report received input from more than 200 business, civic and academic leaders from across the North.

The NPP said the North had the ability to be at the forefront of much of the UK’s economic and political thinking over the coming years, including areas such as digital commerce, devolution, and educational and healthcare reform.

“If the steps set out in the report are taken then the Northern economy has the potential to benefit from an additional £100 billion gross value add over the next three decades, and in doing so an additional 850,000 jobs could be created,” said the NPP.

“Fail to take this opportunity, and the North will fall further behind and the UK economy will become even more unbalanced.

“In order for the North to be more competitive, the report recommends that urgent attention must be given to improving: the performance and aspiration of the North’s schools; the quality of adult skills; the east-west transport infrastructure that connects key Northern cities and Manchester Airport as well as its connectivity to the South; fibre and broadband provision; attractiveness to business investment; and the overall level of ambition in its local decision making.”

George Osborne MP, chair of the NPP, said: “There is a real excitement across the North at present.

“The Northern Powerhouse initiative, which I launched two years ago, has already shifted the North into a new gear.

“Over the past few months I have met hundreds of business leaders across the North and visited new investment projects. The Northern Powerhouse is real and together we can transform the economy of the North of England.

“Now we are at a turning point for the North of England.

“We can either make use of the momentum behind the Northern Powerhouse to really close the north-south gap — or we can let the moment pass, and leave our country divided and the North left behind.

“Get it right and the Northern economy will be £100 billion bigger, with more jobs and higher living standards for all.

“What makes this report from our Northern Powerhouse Partnership different is that it is a plan of action worked on, developed by and now proposed by the North itself.

“Across the private and public sector, and across the political parties, we’ve worked on a common approach. It starts with the listening we’ve been doing to the voices of many Northern businesses and civic institutions over recent months.

“Many issues have been raised with us — from transport connections to devolution.

“But one challenge stood out: education.

“Our education system, right the way from the start of school to higher education, must provide the next generation with the skills, inspiration and training to fulfil their goals and build our economy.

“There is now overwhelming evidence that attainment at 16 is too low in the North, leaving us lagging behind the UK and international competitors.

“We also let go of far too many talented graduates.

“I will be asking a group of leading employers and education leaders to work together with the partnership to draw on the latest evidence and thinking to examine a number of key issues to put this right.

“As the government takes forward its industrial strategy, which commits significant funding to regions across the North, we need to play our full part, with the infrastructure, skills and leadership to compete fully.”

NPP board member Jim O’Neill said: “It is critical that key transport infrastructure is in place to allow people that live in the Northern Powerhouse to work together as one and not in isolation, and to connect with global markets.

“But transport infrastructure alone is not sufficient.

“Something that also shines through in this report is that the education system in the North is not currently performing to its potential; in fact it is currently falling behind the South.

“We need an education system that promotes and retains talent and we need to gain graduates, not lose them.

“The Northern Powerhouse has generated significant interest and attention over the last couple of years.

“The strength of this report and its recommendation lies in its focus on decision making for the north, in the north, not in Westminster.

“It is down to businesses, civic leaders and academics in the north to determine their own future and grasp the opportunities that are available to improve the region.

“I look forward to continuing to engage with leaders across the North, to try and rebalance the economy and benefit the residents of the Northern Powerhouse.”