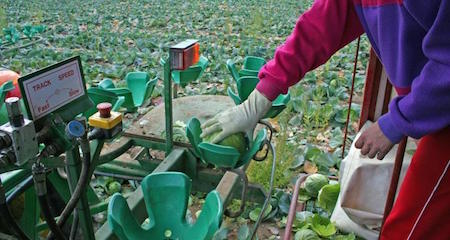 A new survey by the National Farmers Union (NFU) has shown that amid confusion over the UK’s Brexit strategy, numbers of seasonal workers coming to work on British farms have dropped 17%.

This has left some farm businesses critically short of workers to harvest fruit and vegetables.

The survey showed that in May alone there were more than 1,500 unfilled vacancies on British farms.

NFU horticulture and potatoes board chairman Ali Capper said: “A lack of clarity regarding the UK’s future relationship with the EU and a weakened sterling has contributed to the reduction in workers on farm now being reported by labour providers who source seasonal workers.

“Farmers and growers need to know how the government will deal with the need from industries that rely on seasonal workers and the NFU is calling for reassurance farmers will be able to source a reliable and competent workforce both now and in the future.

“Without that, this trend is likely to continue and at this stage in the season any further tightening in the workforce will hit hard on farms.”

The NFU is calling on the government and newly-appointed Defra Secretary of State Michael Gove to provide reassurances to growers that there will be clarity on how farms will access a reliable and competence workforce, both today and post-Brexit.

The survey, covering the period January to May 2017, shows the number of labour providers unable to meet the requirements of the farms they supplied rose four-fold.

The proportion of returnees dropped significantly throughout the first five months of the year, falling from 65% to 33%, a drop of nearly 50%.

“Their past experience and technical ability makes them so valuable and losing them is a big concern.

“This robust survey represents 30% of the total seasonal workforce and it is crucial government understands the importance of seasonal workers to an industry that provides the raw ingredients to feed the nation.”