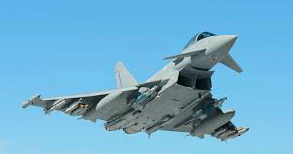 Based on current orders for its Typhoon and Hawk aircraft, BAE Systems said it needed to reduce the workforce at its Military Air & Information business by up to 1,400 roles across five sites over the next three years.

BAE Systems’ Lancashire plants at Warton and Samlesbury are expected to suffer the brunt of the job losses — with up to 750 job cuts.

BAE Systems also plans to cut 375 roles in its Maritime Services business and 150 roles in its Applied Intelligence business.

Other plants expected to be hit by the job cuts include Brough in east Yorkshire, Leeming in North Yorkshire, Portsmouth, and Marham in Norfolk.

The job losses are part of plan by new BAE Systems CEO Charles Woodburn to streamline the business and revamp its air and maritime operations.

The Unite union said it would fight the “devastatingly short sighted” job losses as BAE Systems, which employs about 34,600 people in Britain.

Unite branded the planned job cuts a “betrayal” of a loyal workforce and warned that the move would harm UK manufacturing and deprive communities across the UK of decent well paid jobs into the future.

It accused the UK government of hollowing out the UK’s sovereign defence capability by spending increasing amounts of the defence budget in factories overseas.

Unite estimates that by 2020, 25% of the UK’s defence spend will be benefiting American factories and companies such as Boeing and Lockheed Martin.

Unite assistant general secretary Steve Turner said: “These planned job cuts will not only undermine Britain’s sovereign defence capability, but devastate communities across the UK who rely on these skilled jobs and the hope of a decent future they give to future generations.

“Unite will not stand by and allow the defence of our nation to be outsourced abroad.

“These devastatingly short sighted cuts will harm communities, jobs and skills. Unite will fight for every job and support every community under threat in both BAE’s aerospace and marine divisions.

“These are world class workers with years of training and expertise on which an additional four jobs rely upon in the supply chain.

“The UK government must take back control of our nation’s defence and with it, play its part in supporting UK defence manufacturing jobs.

“Too much taxpayers’ money earmarked for defence spending is going to factories overseas.

“By 2020, 25 pence of every pound spent on UK defence spending will find its way to American factories alone rather than being spent here in the UK.

“This state of affairs is not only hollowing out Britain’s sovereign defence capability and British manufacturing, but leaving the nation’s defence exposed to the whim of foreign powers and corporate interests.

“The British government can and should do more to defend UK defence jobs by investing in Britain and committing that long term projects, such as the next generation jet fighter, future support vessels and Type 31e frigate are built here in the UK.

“A failure to do so and take back control of our own defence needs will be a complete betrayal of the government’s primary responsibility to defend our nation and destroy decent jobs, skills and the communities that support them in the process.”