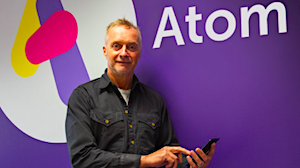 Bridget Rosewell has been appointed as the next chair of Atom bank subject to regulatory approval.

Rosewell has been the chair of Atom’s audit committee since 2014.

Rosewell has an economics background and is also chairman of the Driver Vehicle Standards Agency and sits on the board of Network Rail as well as being a Commissioner with the National Infrastructure Commission.

She has sat on the board of Ulster Bank and the Britannia Building Society.

“Anthony, founder and chairman since Atom bank was established in 2014, has guided the business through the process of gaining a banking licence, raising over £250 million of capital and becoming one of the fastest growing start-up businesses in the UK,” said Atom.

“Atom bank’s success and status under Anthony’s chairmanship has been widely recognised, with the bank continuing to hold a top 10 position in KPMG’s global fintech rankings for each of the last three years.”

Thomson said: “I am an entrepreneur and champion of the customer first and foremost.

“I specialize in disrupting, creating and building and I hope this will be my contribution to the Atom bank story.

“I have loved doing this with Atom but, as the bank moves into a new phase of development, I feel the time is right for me to step down from the role of chairman.

“As founder I remain fully committed to Atom bank’s success and will remain a shareholder.

“Looking ahead, I have recently co-authored a book on the marketing of money that comes out in March.

“As I discuss the messages and learning in the book I am going to spend much of the next twelve months travelling extensively.”

Rosewell said: “It is thanks to Anthony’s vigour and dedication that Atom bank is what it is today.

“Anthony is the consumer’s champion, leading from the front to bring true competition to the industry and to change banking for good.

“It is with regret but also great admiration that the board have accepted his resignation, and I and my colleagues fully understand his reasons for leaving having brought the business to maturity and achieved so much so quickly.

“Today there are 300 people working for Atom bank who will miss Anthony’s unique wit and wisdom, but customers and stakeholders should know that he leaves the bank in great heart and with an exciting future in prospect.”

Atom bank CEO Mark Mullen said: “Without Anthony there would be no Atom bank.

“His skill, experience and entrepreneurial drive have shaped and driven the business from its earliest incarnation.

“It has been my privilege to make this journey in his company and both I and the entire Atom bank family owe him an immense debt of gratitude.

“We wish him well in all of his future endeavours and I am sure there are more chapters to come in his extraordinary story.

“At the same time I am delighted to have the chance to work even more closely with Bridget Rosewell as the new chair of Atom bank.

“Bridget has been an active and engaged member of our board from the beginning of Atom bank.

“In addition to huge experience of UK banking, Bridget brings a zest for analytics and innovation as well a deep and diverse expertise of delivery in both the public and private sectors.”

Carlos Torres Vila, CEO at BBVA, a major investor in Atom Bank, said: “Anthony’s vision and his ability to build great teams was fundamental in our decision to invest in and continue to support Atom bank.

“We thank him for his exceptional leadership and contribution, and we wish him well into the future.

“I am very happy to join in welcoming Bridget’s appointment to chair the business, and we look forward to working closely with her, Mark and rest of the Atom bank team.”