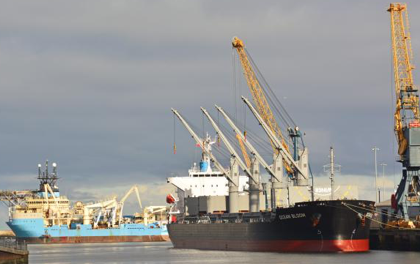 Record levels of cargo were handled at Port of Sunderland in 2017.

The municipally owned port saw a 13% uplift in tonnage passing through its docks compared to 2016 — with figures standing at more than 800,000 tonnes.

Cargo handled has more than double since port director Matthew Hunt took to the helm in 2010.

The growth follows a programme of investment that has unlocked the port’s commercial potential and established it as an intermodal hub, capable of supporting a range of industries.

Hunt, working with port owners Sunderland City Council, has made a number of strategic purchases that have boosted its growth.

This has included the purchase of two cranes, major improvements to the port estate, increased warehousing capacity, and improvements to modal connectivity which saw a previously decommissioned rail line reconnected into the heart of the port.

The port is expected to be further enhanced with the opening of the Northern Spire bridge in the Spring, which will contribute to improved road connectivity in and out of the port.

Hunt said: “It’s been another fantastic year at Port of Sunderland.

“It’s great news for our customers too.

“We handle import and export volume on behalf of a wide basket of North East industrial concerns, and they have recognised that Sunderland, as a location, is ideal for them, to support their needs.

“When I came to the port in 2010, I could see that there was vast potential, with some strategic investment, to really transform it.

“And with a wider programme of huge infrastructure projects underway in the city, that will lead to an even more buoyant economy, this is only the beginning of what we can achieve.”

Councillor Harry Trueman, deputy leader of Sunderland City Council, said: “The economic picture in the city is changing at a rate not seen for decades, with £1.3billion of public/private sector investment being pumped in right now.

“The momentum that the port is gathering, and the investment we are putting into it, is gearing it up to take an increasingly active role in supporting our importing and exporting businesses, so the increase we are seeing in its handling performance is no coincidence.

“We are delighted for Matthew and his team at the port.”