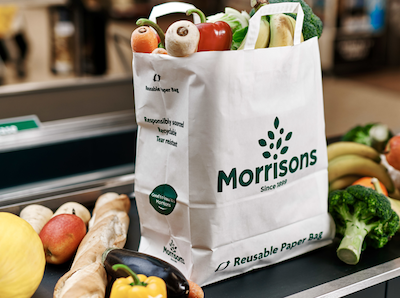 US private equity firm Clayton, Dubilier & Rice (CD&R) has won the auction for Bradford-based supermarket giant Morrisons with a bid of roughly £7 billion.

Including debt, the bid is valued at just under £10 billion.

Bloomberg reported that CD&R’s deal for Morrison will be funded with more than £3.4 billion of equity from funds managed by the private equity firm and that debt of about £6.6 billion will be provided by bridge loans and revolving credit facilities by Goldman Sachs, Bank of America, Mizuho Financial Group and BNP Paribas.

The UK’s Takeover Panel said on Saturday CD&R had offered £2.87 a share for Morrisons, while a consortium led by Softbank-owned Fortress Investment Group offered £2.86 a share.

CD&R is paying a 61% premium to the price of Morrisons’ shares before the takeover battle began.

CD&R’s victory means a return to the UK supermarket industry for Terry Leahy, the former chief executive of Tesco, who is a senior adviser to the firm.

Leahy worked with many of the current Morrisons management team when they were employed at Tesco.

The winning bid was only slightly higher than CD&R’s £2.85 a share offer that Morrisons’ board had recommended in August.

The Morrisons board has recommended that shareholders accept the new offer at a meeting planned for October 19.

For the deal to go through, at least 75% of shareholders voting on October 19 must accept the offer.

“Today’s final offer from CD&R represents excellent value for shareholders while at the same time protecting the fundamental character of Morrisons for all stakeholders,” said Morrisons chairman Andrew Higginson in a statement.

“CD&R have good retail experience, a strong record of developing and growing the businesses in which they invest, and they share our vision and ambition for Morrisons.

“We remain confident that CD&R will be a responsible, thoughtful and careful owner of an important British grocery business.

“Shareholders will now have the final say and, if the offer is approved, the board is confident that Morrisons will continue to go from strength to strength under CD&R’s ownership.”

Leahy said: “We are gratified by the recommendation of the Morrisons board and look forward to the shareholder vote to approve the transaction.

“We continue to believe that Morrisons is an excellent business, with a strong management team, a clear strategy, and good prospects.”

Fortress managing partner Joshua Pack said in a statement: “Morrisons is an outstanding business and we wish the company and all those involved with it the very best for the future.

“The UK remains a very attractive investment environment from many perspectives, and we will continue to explore opportunities.”

On September 14, CD&R said it had reached agreement “in principle” with the pension trustees of Morrisons to provide “additional security and covenant support.”

On August 24, the pension trustees had warned in a letter to the company that a takeover by either of its two potential buyers would “materially weaken” the security of the company’s £5.5 billion pension schemes if no additional protection was agreed.

However, CD&R then announced it reached agreement with the trustees of the Morrisons Retirement Saver Plan and the Safeway Pension Scheme “on the terms of a comprehensive mitigation package to provide additional security and covenant support” to the schemes.

“Government has a responsibility too. It must ensure that the new owners are responsible, long-term investors, seeking to build the business for the future, and that decisions taken are also in the public interest.

“We cannot see a repetition of previous cases where businesses have been loaded with debt and asset-stripped.

“Morrisons is a great British company which must be safeguarded for the future.”

Union leader Joanne McGuinness, Usdaw national officer, said: “Now that the future ownership of Morrisons seems clearer we are seeking discussions with the prospective new owners, to ensure that our members’ interests and the long-term future of the business are protected throughout this process.

“Our main concerns are about job security, while maintaining and improving our members’ terms and conditions of employment.

“We have heard the assurances already given and welcome the constructive working relationship that Usdaw has experienced so far.”