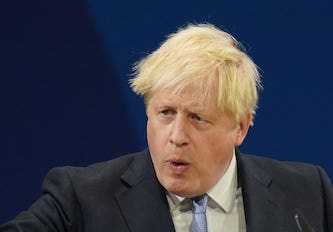 Johnson failed to mention supply shortages, petrol queues or the £20-a-week reduction in universal credit that came into force on Wednesday.

Lesh said shortages and rising prices cannot be blustered away with rhetoric about migrants — and that Johnson’s much vaunted “levelling up” so far consists of little more than listing regions and their local produce.

Johnson’s  told the conference: “The answer to the present stresses and strains, which are mainly a function of growth and economic revival, is not to reach for that same old lever of uncontrolled immigration to keep wages low.

“The answer is to control immigration to allow people of talent to come to this country, but not to use immigration as an excuse for failure to invest in people in skills, and in the equipment, the facilities and machinery … they need to do their jobs.

“To deliver that change we will get on with our job of uniting and levelling up across the UK – the greatest project that any government can embark on.”

“This was an agenda for levelling down to a centrally-planned, high-tax, low-productivity economy.

“Boris is hamstringing the labour market, raising taxes on a fragile recovery and shying away from meaningful planning reform.

“Hiking the minimum wage risks locking the most vulnerable out of a job while increasing inflationary pressures.

“Shortages and rising prices simply cannot be blustered away with rhetoric about migrants.

“It’s reprehensible and wrong to claim that migrants make us poorer.

“There is no evidence that immigration lowers living standards for native workers.

“This dogwhistle shows that this Government doesn’t care about pursuing evidence-based policies.

“We can both control migration and allow migrants to fill skill gaps.

“‘Levelling up’ so far consists of little more than listing regions and their local produce.

“Boris throws out impressive-sounding economic terms like ‘pareto improvements’ to hide the fact that he lacks policies to drive growth.”

“But the PM has only stated his ambition on wages.

“This needs to be backed up by action on skills, on investment and on productivity.

“It’s a fragile moment for our economy.

“So, let’s work in partnership to overcome the short-term challenges and fulfil our long-term potential.

“It’s time to get around the table, roll up our sleeves and get things done.

British Chambers of Commerce director general Shevaun Haviland said: “There is much in the Prime Minister’s ambition for the future of the United Kingdom which should be rightly applauded, but what businesses urgently need are answers to the problems they are facing in the here and now.

“The economic recovery is on shaky ground and if it stalls then the private sector investment and tax revenues that the Prime Minister wants to fuel his vision will be in short supply.”

“For it to be realised, we need ambitious policies aimed at driving growth and reducing tax at the coming Budget.

“After a conference that’s been light on pro-business policy, it’s time for the party of enterprise to get back on the pitch.

“It’s a relief to hear the PM speak positively about the business community.

“But it’s equally remarkable to hear the benefits of a low tax economy vaunted when the government has just signed off a hike in national insurance contributions for employers, sole traders and employees alike, which we estimate will cost at least 50,000 jobs.

“If this government wants a high wage, high skill, high productivity economy then it needs to stop hitting our 5.9 million small businesses with high tax bills before they’ve made a pound in turnover, let alone profit.

“Doing so will be fundamental to delivery of the levelling-up vision.

“Take our proposal to increase the small business rates relief ceiling to £25,000 – an intervention that will help high streets in our most deprived communities, giving small firms more space to create opportunities and drive local growth.

“You have to start with reducing upfront business taxes and costs to unlock investment in training, recruitment and innovation.

“If you think that process works in reverse, you’re putting the cart before the horse.

“They were hoping to hear a practical, clear action plan for addressing these issues emerge from this conference. They have been left wanting.

“With furlough ending, turning jabs, jabs, jabs into jobs, jobs, jobs will mean helping the small businesses that hire 60 per cent of the private sector workforce as they wrestle with surging operating and tax costs.

“That starts with increasing the Employment Allowance – a pledge to do so was rightly central to this government’s manifesto.”