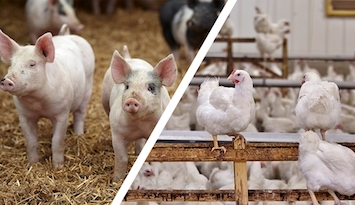 Cranswick said its full year dividend increased 8% to 75.6p — about £32.8 million — as it achieved 32 years of unbroken dividend growth.

However, Cranswick CEO Adam Couch warned in his review that the Russian invasion of Ukraine has led to a “rapid escalation” in soft commodity prices and wheat in particular, which, left unmitigated, “would have been unsustainable for the pig farming industry.”

The CEO said more needs to be done quickly by the UK Government to help save the pig farming industry, which is also suffering for a shortage of skilled butchers “resulting directly from the Government’s post-Brexit immigration policy.”

Couch said the price of cereals, which represent between 60% and 70% of the cost of growing an animal, increased by over 50% in the immediate aftermath of the start of the war in Ukraine.

“With the support of our customers, we have partially reflected these higher input costs in the price we pay to both our own farming operations and our third-party producers,” said Couch.

“I am, though, disappointed that the (UK) Government’s response to our sector’s calls for support has been so muted.

“The rapid escalation in feed costs, together with other inflationary pressures and the well-publicised shortage of skilled butchers resulting directly from the Government’s post-Brexit immigration policy, has put the pig producer sector under severe and unsustainable strain.

“We have suggested ways to mitigate these challenges, including reducing exports of soft commodities and their use in bioethanol production, which have not been acted on.

“More needs to be done by Government in the coming months to ensure that we have a viable long-term pig farming industry.”

Cranswick employs 13,300 people throughout the UK.

Couch added: “Trading in the new financial year has been in line with the board’s expectations.

“Notwithstanding the challenging operating conditions we continue to experience, our outlook for the group for the current year is unchanged.

“We have a solid platform from which to continue Cranswick’s successful long-term development.“

“The food producer is dealing with unprecedented challenges from inflation with a sharp jump in the price of cereals, the biggest cost of growing an animal, as well as a shortage of butchers after Brexit and problems with the global supply chain.

“The fact that in the face of these difficult times Cranswick has managed to beat full-year expectations on the bottom line and stick to its guidance comes as a welcome surprise to investors, sending shares sharply higher to buck the recent negativity.”