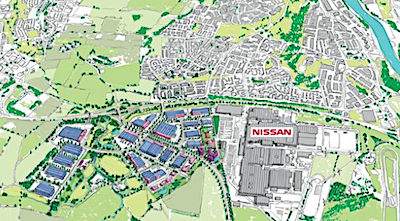 A “nationally significant” advanced manufacturing park expected to deliver more than 5,000 jobs in the North East of England is moving forward with the appointment of a development partner.

IAMP has been designated a “Nationally Significant Infrastructure Project” by the UK Government.

Henry Boot Developments will be responsible for the building of the site which is proposed for an area close to the A19 and to the north of Nissan’s existing manufacturing plant.

Henry Boot said IAMP will be a world-class environment for high tech industries and advanced manufacturing businesses, and is designed to attract more than 5,000 jobs and bring in more than £300 million of private sector investment over the next 10 years.

It is anticipated the IAMP will also help secure more automotive supply chain jobs following Nissan announcements on the Qashqai and X-Trail replacement models being manufactured in Sunderland from 2020.

The UK Government has already pledged £42 million through the North East Local Enterprise Partnership towards infrastructure at IAMP including new roads, bridges and environmental enhancements.

Councillor Paul Watson, Leader of Sunderland City Council, said: “We are delighted to have awarded the development partner contract to Henry Boot Developments, a company with a proven track record of delivering projects of this scale and significance.

“The IAMP is one of the most strategically important projects in decades for Sunderland, South Tyneside and the entire North-East region.

“With Nissan as a magnet there is huge interest in IAMP and so it is critical that we assemble a delivery team with the expertise to deliver this project.

“We know Henry Boot Developments will be a flexible, responsive partner, as this site will be developed to respond to market demand – and there is already a great deal of interest.”

“We are delighted to be part of the IAMP partnership, developing a world class hub for businesses in the automotive and advanced manufacturing sectors; South Tyneside and Sunderland City Councils have a shared vision to develop this site as an attractive location for national and international business investment and job creation.”

Councillor Iain Malcolm, leader of South Tyneside Council, said: “There is a huge opportunity for both South Tyneside and Sunderland to further expand their capacity when it comes to advanced manufacturing.

“We know already that there is strong interest from investors keen to capitalise on the fantastic assets the North East can offer businesses in the manufacturing sector.

“We have only scratched the surface when it comes to the economic opportunities this sector can create for the North East, and the IAMP is the key that will unlock that potential.

“We expect there to be a huge level of interest from international businesses looking to base themselves on a purpose-built development with infrastructure to support their needs.

“We went to market to find a developer that could respond to the needs of the market, and we are confident that we have found that in Henry Boot Developments.”