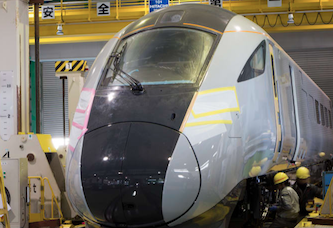 It said 19 new five-carriage trains harnessing Japanese bullet train technology are due to enter service in 2019.

This will be the third fleet built for the TransPennine Express.

Production work has begun on two test trains in Japan which will arrive in the UK next year.

The modern Japanese bullet train inspired fleet is being built by Hitachi and financed by Angel Trains.

The trains will be maintained at Hitachi’s newly built £80 million depot in Doncaster, home to 250 employees and four apprentices.

Hitachi Rail Europe said long-term jobs will also be secured at existing depots in Liverpool, Newcastle and Edinburgh, which all play a role in maintaining the trains.

From 2019 the fleet will connect major cities in the North of England and Scotland and will run from Manchester and Liverpool, across the Pennines to cities including Leeds, York, Newcastle and Edinburgh.

“Fast efficient travel on trains fit for purpose will open up rail to new users in the business and leisure sector and is one of the key components required for growing the Northern economy through enhanced connectivity.

“This is great news for the North and demonstrates that visionary franchise agreements can really deliver.”

Berry Sas, projects director for Hitachi Rail Europe said: “Millions of journeys along the popular transpennine route will be transformed once these pioneering intercity trains are introduced into service.

“We have invested £80 million in a state-of-the-art depot in Doncaster to ensure these new trains are running in top condition for each and every journey.”

“Once in service in 2019, these will be some of the most advanced trains in the UK and coupled with the other new trains we are having built, will provide an additional 13million seats a year.

“We are committed to supporting the northern economy and are pleased that the fleet, which will be maintained at locations across the north and in Scotland will be supporting 250 long-term jobs”

Malcolm Brown, Angel Trains CEO said: “We are delighted that work has begun on these modern, efficient and fast trains, moving Angel Trains a step closer to the delivery of this fleet.

“Once delivered in 2019, hundreds of thousands of TransPennine Express passengers throughout the franchise period will enjoy a transformed northern inter-city travel experience.

“This will include a reliable, WIFI-enabled service, delivering travellers quickly and seamlessly to their destination, regardless of whether the route is electrified or unelectrified.

“By procuring, financing and leasing these new bi-mode trains, Angel Trains has demonstrated its commitment to both northern investment and providing value to customers, bringing improved travel and more jobs to the region.

“We have already invested over £5.0 billion in the UK rail industry and, working with our partners in the industry, we look forward to continuing to make further significant investments in rolling stock in future.”

The new fleet of Hitachi intercity trains (Class 802) were ordered by FirstGroup for the TransPennine Express in 2016.

The trains will be built across Hitachi’s global manufacturing sites.