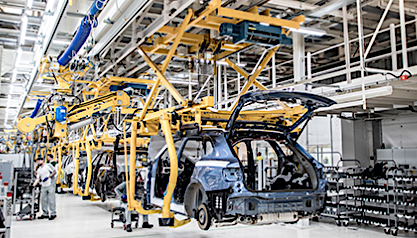 UK car manufacturing fell 4.6% in November, according to figures from the Society of Motor Manufacturers and Traders (SMMT).

Production for the UK home market fell for the fourth month in a row.

It dropped 28.1%, the largest decline in 2017, as consumer confidence decreased amid Brexit uncertainty and speculation over potentially negative government policies towards diesel.

In November, exports reached their highest proportion of output this year — at 85.0%.

Year-to-date, more than 1.5 million cars have rolled off production lines, with nearly eight out of 10 destined for one of 160 global markets.

While export volumes remain stable, production for the home market is down 9.0%, resulting in overall output falling 2% since January.

“Whilst it is good to see exports grow in November, this only reinforces how overseas demand remains the driving force for UK car manufacturing.

“Clarity on the nature of our future overseas trading relationships, including details on transition arrangements with the EU, is vital for future growth and success.”

Meanwhile, demand from overseas markets declined 40.7%, however — but the proportion of CVs built for export remains high at 67.5%.

Year-to-date production has also fallen, with output for UK and overseas markets down 24.4% and 9.2% respectively.

“Whilst fleet purchasing cycles have fluctuated, declining confidence among operators in the CV market is no doubt affecting production.

“To stimulate demand and safeguard the competitiveness of our industry, we need urgent clarity on transition arrangements and the nature of our long-term future relationship with Europe.”