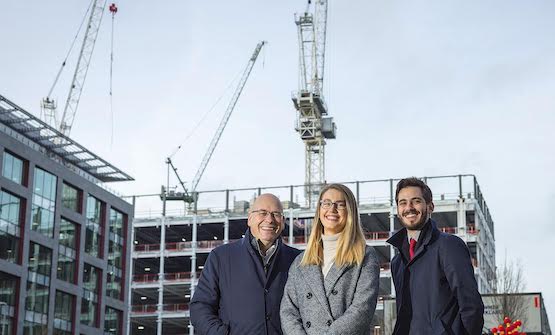 Manchester has completed another strong year of real estate completions — with the number of schemes delivered in 2019 at its highest level since 2006 –according to Deloitte Real Estate’s annual Manchester Crane Survey.

The Manchester Crane Survey tracks the level of development across central Manchester and Salford city centre.

Primarily driven by the residential sector, 2019 saw the completion of 27 schemes in Manchester, the second highest number ever recorded.

In total, 3,619 residential units were delivered to market, while 12,357 units are currently under construction.

These include key schemes such as West Tower at Deansgate Square, Trinity Blackfriars and the first phase of Manchester Life, all of which reached completion in 2019.

The first student residential development since 2017 was delivered in 2019, with 384 new beds added by Vita Student at Circle Square.

Also underway are the student towers at River Street and Artisan Heights, set to add an extra 1,410 student beds to Manchester city centre.

With 8,880 of the residential units under construction expected to deliver in 2020, it is expected that 2020 will have the highest rate of delivery since the Crane Survey began in 1999.

Simon Bedford, partner at Deloitte Real Estate, said: “In 2014 we saw a huge surge in construction activity across both Manchester and Salford that lasted, in earnest, until 2019.

“Now, whilst the number of new starts is levelling out, we are seeing the results of Manchester’s construction boom reflected in the city’s skyline.”

“Emerging neighbourhoods such as New Islington and Ancoats, are now some of the most desirable locations in Manchester, with a new generation of social housing helping to support tight-knit and vibrant communities.”

In the office sector, 427,000 sq ft of space was delivered to market, with major schemes such as Dantzic in NOMA, No.8 First Street and ABC on Quay Street all reaching completion.

Meanwhile, over two million sq ft of office space is currently under construction for the second year in a row.

Bedford added: “The strength of the commercial sector is a promising sign for the city, as we continue to see an increased demand for high quality, Grade A office space.

“Not only is this servicing existing Manchester-based businesses, but we are seeing blue chip organisations opening up permanent, large-scale corporate offices here – demonstrating levels of confidence in the city’s business potential.

“When these office schemes are completed and the new space is fully occupied, it is estimated that this will add 15,500 new jobs, £570 million in Gross Value Added (GVA) and £309 million in wages to the regional economy.”

The Crane Survey also highlights the importance of visitors to Manchester, with continued growth in the retail, leisure and hotel sectors.

Currently, over 400,000 sq ft of leisure and retail floorspace is under construction, with much of this space earmarked to become bars, restaurants and stores.

In total, 344 new hotel beds across three schemes were added to Manchester in 2019, with 304 of these near to Piccadilly station at Dakota Deluxe and London Warehouse.

Meanwhile, there are an additional 2,466 beds also underway across 11 different sites, representing a 24% increase in the number of hotel rooms under construction.

“As a result, the hotel sector continues to perform very well – with high profile sporting and cultural events driving people towards the city.

“Overall, tourism is worth around £4.5 billion to the city’s economy, helping to support over 50,000 jobs.”