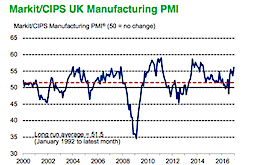 The UK’s manufacturing sector ended 2016 on a positive note with rates of growth for production and new orders in December among the best seen over the past two-and-a-half years.

Companies benefited from stronger inflows of new work from domestic and overseas clients — with the latter boosted by the weak sterling exchange rate.

The lower pound can make British exports cheaper for buyers using other currencies.

Employment in UK manufacturing rose for the fifth consecutive month in December.

The CEO of the Chartered Institute of Procurement & Supply (CIPS) said the “fervent activity” and “fizz in new orders” placed suppliers under pressure with delivery times lengthening and manufacturers reporting raw material shortages.

The seasonally adjusted Markit/CIPS Purchasing Managers’ Index (PMI) rose to a 30-month high of 56.1 in December, up from 53.6 in November and well above its long-run average of 51.5.

The headline PMI has signalled expansion in each of the past five months.

Growth of production and new business was broad-based by sector, with strong gains registered across the consumer, intermediate and investment goods industries.

The rate of export growth was the second-highest since early 2014, bettered only by September 2016.

Improved inflows of new business led to a slight increase in backlogs of work in December, the first rise since February 2014.

Employment rose for the fifth consecutive month in December, with the pace of jobs growth accelerating to the fastest in 14 months.

Rates of inflation for input costs and output charges both remained among the fastest seen during the survey’s history.

Rob Dobson, senior economist at IHS Markit, which compiles the survey, said: “The headline PMI hit a two-and-a-half year high in December, with rates of expansion in output and new orders among the fastest seen during the survey’s 25-year history.

“Based on its historical relationship against official manufacturing output data, the survey is signalling a quarterly pace of growth approaching 1.5%, a surprisingly robust pace given the lacklustre start to the year and the uncertainty surrounding the EU referendum.

“The boost to competitiveness from the weak exchange rate has undoubtedly been a key driver of the recent turnaround, while the domestic market has remained a strong contributor to new business wins.

“A plus point from the December survey was that the expansion was led by the investment and intermediate goods sectors, suggesting capital spending and corporate demand took the reins from the consumer in driving industrial growth forward.

“On the prices front, higher input costs continued to feed through to increased selling prices, with rates of inflation remaining among the highest seen during the survey history.

“Of the companies citing a cause of higher costs, 75% linked the increase to the exchange rate.”

David Noble, group chief executive officer at the Chartered Institute of Procurement & Supply (CIPS) said: “The stimulus for growth came from new order wins in both domestic and overseas markets.

“The rates of growth remained marked, while new export orders were boosted by the sustained weakness of the pound.

“Some respondents commented on an increase in orders from India, China, the US and EU.

“This growth in new order inflows was the strongest in two-and-a-half years.

“In response, employment levels gathered pace at the fastest rate for 14 months, where SMEs saw the biggest rises in staffing.

“Supplier delivery times lengthened for the eighth month in a row, with manufacturers reporting raw material shortages as placing strains on vendor performance.

“Backlogs of work also increased for the first time since February 2014.

“The impact of rising input costs continued to be felt, as the rate of cost inflation stood at one of the highest in the survey’s 25-year history.

“However, this did not deter manufacturers from leveraging their buying capability and increasing their input orders — the fifth month in succession.

“In fact, the rate of stock building reached its fastest for six years, partly to counteract future expected price increases in raw materials and any possible shortages in the year ahead.

“This fizz in new orders signals good news for UK manufacturers which has previously been hit by uncertainties following the EU referendum, and the sector looks set to reach a more robust growth path at the start of 2017.”