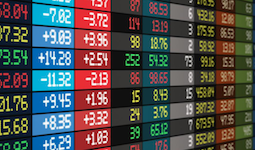 The third quarter of 2017 has seen listed companies in the North West of England add almost £2 billion to their total stock market values, according to business advisory firm Deloitte.

The latest North West Share Index reveals the value of the region’s listed businesses has risen by 4% in the last three months, with total market capitalisations jumping from £43.7 billion to £45.6 billion.

“This impressive result is largely attributable to the strong performance of the region’s largest listed businesses, those ranked on the FTSE 350 index,” said Deloitte.

“In total, six of the 18 companies achieved double-digit growth, with cyber security firm NCC Group seeing a 32 per cent increase in its market capitalisation, which now stands at £598 million.

“The firm has enjoyed a period of consistent growth over the last six months, with its value jumping 63 per cent since March 31.

“This follows a buoyant summer period, which saw sales jump five per cent after the introduction of a new pricing strategy.

“In contrast, the value of those listed on the Alternative Investment Market (AIM) suffered a minor dip, falling by a total of £7 million.

“Despite this, some of the North West’s smaller companies still achieved positive results.

“Revolution Bars, amidst strong rumours of a £100 million takeover by pub group Stonegate, almost doubled its value from £53.5 million to £106 million.

“However, the transaction’s collapse has seen the company’s share price fall 10 per cent in recent days.”

Deloitte said the North West’s retail sector has performed exceptionally well in the last quarter, with the overall value of businesses in the sector jumping 5% to almost £20 billion.

Doug King, director at Deloitte in the North West, said: “The North West is represented by a number of outstanding global brands, many of which have performed well in the last quarter.

“With the likes of JD Sports and B&M headquartered in the region, the retail sector is an important part of the North West economy, as the values of these companies make up nearly half of the region’s funds on the public markets.

“As a result, it is unsurprising that the retail sector has performed so strongly in the third quarter of the year.

“Many retailers will have benefitted from the ‘back-to-school’ boost, and many consumers will have hit the high streets to make most of the summer sales.”