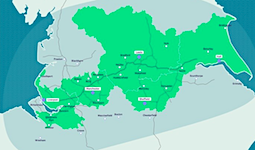 The UK government has announced ambitious plans to create a new “Northern Forest” along the M62 corridor from Liverpool to Hull.

Over the next 25 years, the Woodland Trust and Community Forest Trust are aiming to plant more than 50 million trees, with the government providing almost £6 million to launch the first project of its kind for more than a quarter of a century.

The new forest will span more than 120 miles and include the areas around Bradford, Leeds and Manchester.

The Woodland Trust and Community Forest Trust estimate this new forest will generate more than £2 billion for the UK economy.

The first planting will begin in March this year, supported by funding from the Heritage Lottery Fund, at the Woodland Trust’s 680-hectare Northern Forest flagship site at Smithills, Bolton.

The Woodland Trust is already committed to investing over £10 million in this project and several others over the wider forest area.

The Northern Forest will connect the five Community Forests in the north of England – the Mersey Forest, Manchester City of Trees, South Yorkshire Community Forest, the Leeds White Rose Forest and the HEYwoods Project – with green infrastructure and woodland created in and around major urban centres such as Chester, Liverpool, Leeds, and Manchester.

It will follow on from the successful National Forest, which transformed 200 square miles of industrial sites in the heart of England.

Austin Brady, Director of Conservation at the Woodland Trust, said: “The Northern Forest will accelerate the creation of new woodland and support sustainable management of existing woods right across the area.

“Planting many more trees, woods and forests will deliver a better environment for all – locking up carbon on a large scale, boosting wildlife habitat and greening our towns and cities.

“The Woodland Trust and Community Forests will use new and innovative mechanisms to engage communities and a wide range of partners in delivering the forest.”