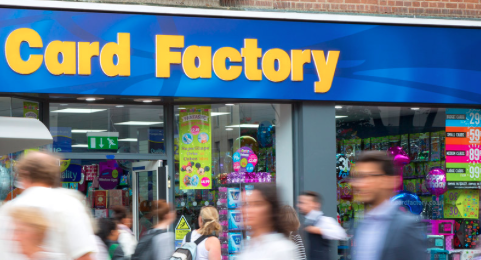 Shares of Wakefield-based greeting cards retailer Card Factory fell about 17% after it predicted lower core earnings for the current year.

Card Factory said said it now expects underlying EBITDA for the current year to be between £93 million and £95 million.

“Across the group, like-for-like sales growth has been driven primarily by lower margin non-card categories, such as gifts and dressings, with card sales stable year on year,” said Card Factory in a trading update for the 11 months ended December 31, 2017.

“Given this, and the previously announced margin pressures being experienced by the group, the board currently expects underlying EBITDA for the current year to be in the range £93.0-95.0m.”

Card Factory shares fell 17% to around 234p to give the firm a current stock market value of around £964 million, according to Reuters data.

Card Factory CEO Karen Hubbard said: “As I approach my second anniversary with the business, it is pleasing to report that Card Factory has traded well through the competitive Christmas trading period with customers once again responding positively to our card and non-card ranges.

“As a result, like-for-like store sales have improved in the year to date.

“As we have reported previously, the group has faced significant cost pressures in the year; these, together with the further change in margin mix given the ongoing out-performance of lower-margin non-card categories, are reflected in our expected outturn.

“We anticipate that the combined impact of foreign exchange and wage inflation in FY19 will result in £7-8m of additional costs; whilst we have plans to mitigate this impact as far as possible, we recognise that against this backdrop, any EBITDA growth for the year is likely to be limited.

“Looking further ahead, cost headwinds should ease unless there is a further dramatic shift in sterling.

“We believe that our market leading proposition, underpinned by our unique vertically integrated model, provides our business with significant competitive advantage.”