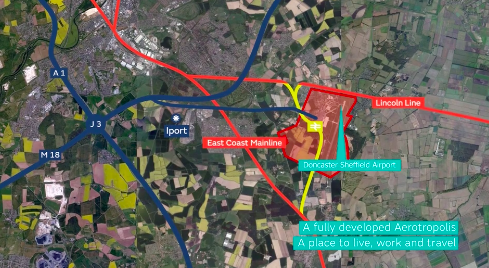 Doncaster Sheffield Airport has launched its ambitious “Vision and Masterplan” outlining its expected growth over the next 20 years.

“The Vision” would see the creation of an “Aerotropolis” in the Sheffield City Region with the airport’s 1,600-acre site, known as Aero Centre Yorkshire, becoming a central hub.

They say “The Vision” would deliver £3.2 billion GVA (gross value added) per year by 2048 across the region.

A key component of the plan is the addition of an airport rail station connected to the East Coast Mainline — and requiring only seven miles of new track, it could be open in just five years’ time.

The station would provide a direct rail link to London and Newcastle in less than 90 minutes of travel time.

It would also be connected to major regional centres such as Sheffield, Leeds and Hull.

The station proposal has received support from stakeholders including Transport for the North, Network Rail and current train operators.

The rail station would also accelerate the development of housing in the immediate vicinity and surrounding areas, with an initial delivery of 8,500 houses.

The airport’s masterplan detailing the future development of the current site and projected growth over the next 20 years will now go out for public consultation.

“It is straightforward to build and deliverable in five years.

“It is of national significance for aviation and the economy, particularly the North, and we want to see it realised as soon as possible.

“This is required beyond what Heathrow expansion will deliver, with a range of benefits for the North and East of the country.”

Nigel Brewster, vice-chair of the Sheffield City Region Local Enterprise Partnership (LEP), said: “I would urge residents, businesses, and politicians from all parties to get behind these ambitious yet deliverable plans for our airport, which include connecting it with the East Coast Mainline.

“Doncaster Sheffield Airport and its partners have a clear aim in mind and tangible plans in place to make it a reality.

“Doncaster Sheffield Airport is central to the city region achieving its economic plan of 70,000 additional jobs, an additional £3.1 billion GVA and 6,000 new businesses.

“We have always seen growth of the airport as being a key priority, but no one ‘actor’ can make this growth happen.

“We must come together with Peel, Doncaster Council, and Transport for the North – and the city region must also do its own part through investment in local transport infrastructure.

“This is why we’re also currently consulting on our own transport strategy, which will enable interventions that make most impact to us within the city region.

“We’re clear that it will be those interventions that join up our places locally, which will ultimately make the large-scale investments work for the businesses and residents we serve.

“I would urge people to discover our draft transport strategy on the Sheffield City Region website and find out how you can contribute to the debate.”

Jonathan Spruce, Strategy Director, Transport for the North, added: “Doncaster Sheffield Airport’s Vision would see it unlock significant passenger and cargo capacity and could create a major economic cluster, supporting the transformation of the North of England economy.

“We are currently consulting on our draft Strategic Transport Plan for the North which identifies DSA as a key economic centre and we recognise the need for enhanced rail access to DSA.”