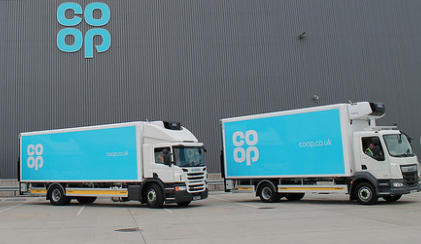 Manchester-based Co-op Group said it made 2017 profit before tax of £72 million following a loss of £132 million in 2016 that reflected the write down of its stake in Co-operative Bank.

Revenues were unchanged at £9.5 billion.

The mutually-owned Co-op Group’s business strategy involves returning profits to its members and their communities.

Co-op said its active membership increased by 15% to 4.6 million

It said Co-op “member rewards” of £74 million were generated – with members receiving £61 million in “personal rewards” and £13 million earned for more than 8,000 community projects.

The Co-op said its position as the UK’s largest corporate supporter of Academy schools strengthened with addition of three new academies and the creation of a plan for significant expansion, more than tripling number of Co-op Academy schools.

The Co-op reported a 60% increase in apprenticeships year-on- year, recruiting 742 new apprentices and a target of 1,000 apprentices agreed for 2018.

Co-op CEO Steve Murrells said: “Today’s results show how much progress we have made.

“All our businesses have performed well and we have increased profits and reduced debt, while continuing to invest for colleagues, members and customers.

“The success we are enjoying shows that the Co-op’s difference really resonates today – a different ownership model and a different approach to business, based on returning profits to our members and their communities.

“We’re delighted with our performance, but we’re hungry for more and ready to create the Co-op of the future.

“Whether it’s in our existing business areas or through new ventures, we want to make the Co-op ever more competitive, relevant and innovative.

“That is why we are launching the Stronger Co-op, Stronger Communities plan.

“To really succeed as a Co-op we need to be even more successful commercially and our community efforts need to be concentrated on the things that matter to people.

“We are going to deliver more Co-op products and services to more people throughout the country and that is what will really allow us to spread our difference.

“We know there are challenges ahead, but we are confident that with the support of our colleagues and our members, the strength of our brand and continued investment in our businesses we will achieve our goals.”