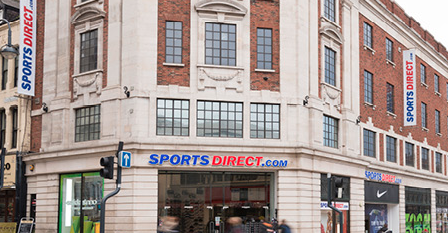 Shares of Mike Ashley’s Sports Direct International fell about 7% after it said its reported profit before tax fell 72.5% to £77.5 million despite revenue rising 3.5% to £3.36 billion in the 52 weeks to April 29.

Analysts at Peel Hunt wrote: “Sports Direct’s prelims are at the top end of its EBITDA guidance and comfortably ahead of market expectations.

“The sales numbers are not eye-catching, but this was a strong showing from a gross margin (UK) and cost base perspective, something that management clearly had visibility on when it made what looked like a bold prophecy for growth this time last year.”

Some analysts, though, question Sports Direct’s strategy of taking big stakes in other businesses.

Sports Direct has increased its “total direct and indirect holding” in Debenhams to 29.7%.

Debenhams’ shares have fallen about 72% over the last year after a series of profit warnings.

Sports Direct said the fall in reported profit was “largely due to … an £85.4 million impact from our Debenhams strategic investment … mitigated to some extent by investment income” and “prior year investment income from the sale of JD Sports shares and disposal of the Dunlop brand.”

Sports Direct chairman Keith Hellawell said: “In terms of statutory reporting, our profit before taxation has reduced by 72.5%, which arises predominantly from the profit on sale of the Dunlop business and the profit on the sale of JD Sports shares included in the results for the prior period and the recognition of the net losses on our strategic investment in Debenhams in the current period.”

CEO Ashley said: “I’m pleased that our underlying EBITDA has come in at the top end of our expected range at £306.1 million as we indicated this time last year, and also that the underlying profit after tax has increased substantially to £104.9 million.”