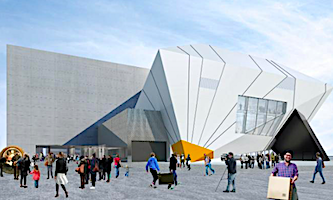 The Factory – a new cultural venue in the heart of Manchester – has been given final approval by Manchester City Council’s planning committee.

It will be one of the largest purpose-built cultural spaces in the world.

The Factory will deliver a huge boost to Manchester, creating and supporting 1,500 full-time jobs and adding £1.1 billion to the city’s economy over a decade.

As part of a major creative, cultural and technological hub at St John’s, it will also help anchor the regeneration of that part of the city centre.

The landmark building, designed by architects Office for Metropolitan Architecture (OMA) founded by Rem Koolhaas, will feature two main spaces: a vast warehouse with a capacity of around 5,000 and an auditorium for audiences up to 2,000.

Manchester City Council leader Richard Leese said: “Culture and creativity have a critical role to play in Manchester’s future success – not just by inspiring ideas and imaginations but through creating opportunities and jobs.

“The Factory will help take this to a whole new level and open up a new chapter in Manchester’s history of innovation.

“Not only will people no longer need to move to London for the best cultural and creative roles, it will give audiences from around the country and even the world another great reason to head here.

“The Factory will build on the city’s strengths as centre for culture and creativity and the success of the Manchester International Festival, which will operate and create the year-round artistic programme.”

Manchester International Festival CEO John McGrath said: “The Factory will provide space for the greatest artists from around the world to create work of extraordinary ambition and scale, work they always dreamed of making.

“It builds on the city’s brilliant heritage as a centre for production, for radical ideas and for doing things a bit differently.

“It firmly underpins Manchester’s reputation as an internationally important city for culture, creativity and technology.”