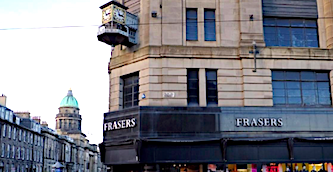 Mike Ashley’s Sports Direct International announced on Friday it acquired House of Fraser from administrators for £90 million in cash.

However, Sports Direct International did not take on responsibility for House of Fraser’s historic pension obligations.

It is thought the pension scheme will now pass to the UK’s Pension Protection Fund.

Pension schemes that come under the PPF often pay out less.

Sports Direct added: “For the year ended 28 January 2017 (the last date to which statutory accounts are available for the parent company of the operating companies and prior to the appointment of the administrators), the House of Fraser group had gross assets of £946.3 million and made £14.7 million net profit.”

Ashley, who also owns Newcastle United, said: “We will do our best to keep as many stores open as possible.

“It is vital that we restore the right level of ongoing relationships with the luxury brands.

“Our deal was conservative, consistent and simple.

“My ambition is to transform House of Fraser into the Harrods of the high street.”

Ashley added: “This is a massive step forward and further enhances our strategy of elevation across the group.

“This will benefit both House of Fraser and Flannels in the luxury sector.

Sofie Willmott, senior retail analyst at GlobalData, said that to give House of Fraser the best chance of survival, Sports Direct and Ashley must make “drastic changes” to both its product proposition and store environment to entice shoppers back.

Willmott said this will require significant investment – something which the chain has been starved of in recent years.

“Although very few of House of Fraser’s own brands remain, those such as Issa and Biba could be incorporated into this new format.

”Given the success of luxury department stores like Selfridges and Harrods, Ashley may attempt to replicate their model using House of Fraser’s locations, however it is questionable whether the high end price points would appeal nationwide, particularly given that London-based department store retailers have benefited from tourism.”

Richard Lim of Retail Economics said: “This is a hugely ambitious move for Sports Direct.

“The combination of both businesses will yield some vital cost-saving synergies while it’s likely that some of the struggling House of Fraser sites will be rebranded to Sports Direct.

“Nevertheless, this is a part of the industry that is under a huge amount of pressure.

“Turning around the business will not come easy.

“The stores are failing to attract sustainable levels of footfall while battling against rising operating costs and shifts in shopper behaviour.”

Unite, the UK’s largest union, said it has concerns about the deal.

Scott Lennon, Unite regional officer with responsibility for Sports Direct, said: “Sports Direct is a leopard that has not changed its spots and we hope that its poor record on pay and employment practices are not transferred to the House of Fraser.

“Sports Direct’s record at the Shirebrook warehouse operation in the East Midlands has been dreadful and, despite the recent terrible publicity, wages remain at the minimum legally payable, and the terms and employment conditions are threadbare.

“The company does not want to engage in any meaningful sense with Unite at Shirebrook and this obviously sparks concern at the fate that awaits the House of Fraser staff under the new ownership.

“We fear for jobs and employment conditions at the House of Fraser going forward.

“The staff are entering a period of great uncertainty and worry.

“Ministers need to wake up to what is happening to hard working employees who have minimal employment protections in 2018 Britain.”