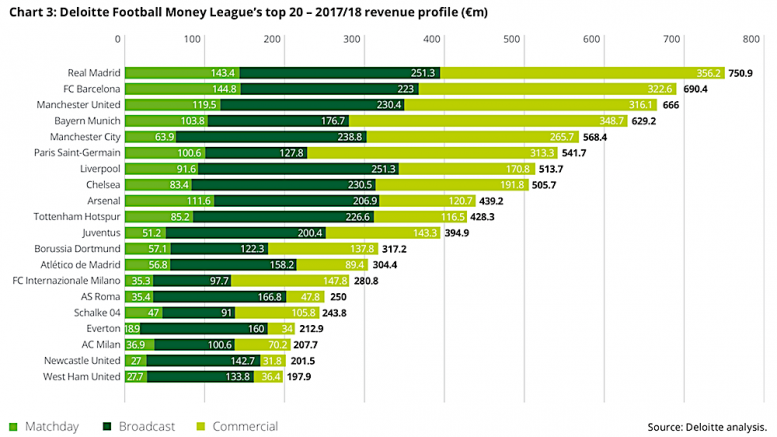 The world’s top 20 revenue-generating football clubs include four from the North West of England, according to the 22nd edition of the Deloitte Football Money League.

Newcastle United in the North East are 19th.

Manchester United were knocked off the top spot by Real Madrid, but the English Premier League continues to dominate the football revenue league.

Manchester United slipped to third with revenue of £590 million, having been first last year.

Everton, with £188.6 million, ranked 17th in the world by revenue, the club’s best ever Money League position.

Sam Boor, senior manager in the Deloitte Sports Business Group, said: “Despite Manchester United’s two year reign at the top of the Money League coming to an end, the financial performance of North West clubs continues to impress.

“The region has the same number of clubs in the top 20 as the best performing country outside England (Italy: Juventus, Internazionale, AS Roma and AC Milan).

“With Liverpool and Manchester City currently occupying positions towards the top of the Premier League, and three of the four North-West Money League clubs through to the Round of 16 of this season’s UEFA Champions League, there is the potential for even further revenue growth next year.”

“At the top, we have seen Real Madrid shatter records, becoming the first club to break the three-quarters of a billion euro mark and claim a record twelfth Money League title in the process.

“Manchester United slip to third place in this year’s Money League after two years in top position, despite a return to the Champions League in 2017/18 and overall revenue growth of 2%.

“Further revenue growth is expected in 2018/19 and a continuation of recent on pitch improvements will help in building a virtuous circle of football and commercial success.”