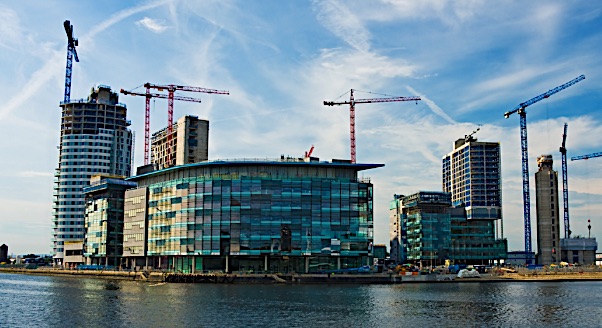 An expert panel chaired by Cambridge public policy professor Diane Coyle has unveiled the results of an independent prosperity review on the current state and future of Greater Manchester’s economy.

The review finds that the city-region has “world-class strengths” but real work is still needed to reduce social disparities, boost wages and improve productivity.

The report produced by the independent panel, which includes head of Bloomberg Economics, Stephanie Flanders, highlights Greater Manchester’s strengths in health innovation and world-leading advanced materials such as Graphene.

It also emphasises the city-region’s  strengths in manufacturing, digital and creative industries, and professional services.

Alongside the positive findings, however, the review report stresses that there are clear challenges for the city-region’s leaders.

It concludes that more needs to be done to reduce social inequality, drive up wage growth, and boost productivity – particularly in sectors such as retail and social care where there is often high employment but low pay and low productivity.

“While there is much to be optimistic about in this report, there are some stark messages that should come as no surprise: regional inequality still persists, and we’re still facing barriers beyond our control when it comes to growth.

“We are now working with the government to develop an ambitious Local Industrial Strategy which will respond to many of these issues and allow us to provide that extra strength to the UK’s economy.

“We can deliver the Northern Powerhouse we’ve been promised but we will need to continue to work closely with ministers to do so.”

The panel’s recommendations focus on three areas: the contribution of health to productivity; the importance of increasing skills and their utilisation by employers; and the role of innovation and infrastructure.

The report recommends that the Greater Manchester city-region:

Greater Manchester’s lead for Economy, Richard Leese, said: “We’ve got some world-class strengths that we absolutely must play to when developing our Local Industrial Strategy, but we must also recognise that over decades  we have seen a rise in lower productivity sectors and lower skilled jobs.

“We need to take on board the recommendations in this report to increase productivity in these areas, and use the opportunity to reduce social disparities and boost wages.

“We are one of the UK’s leading digital city regions and we must take advantage of that.

“Through the growth of e-commerce, online shopping, and home deliveries, the retail sector – a major employer for Greater Manchester – will quickly find itself at the forefront of technology and innovation.

“We must capitalise on that and ensure the resulting rewards are passed onto our citizens.”

Commissioned by Greater Manchester Combined Authority to be independent of local and national government, the review has been delivered by a panel of six leading experts, with input from academics, think-tanks, businesses, the community and voluntary sector, social enterprise, and the public sector.

The panel’s chair, Prof. Diane Coyle, of the Bennett Institute for Public Policy, University of Cambridge, said: “The centralisation of policy-making in Whitehall has contributed to weaknesses in the UK’s economic performance.

“Productivity, and therefore living standards, in London and the South East of England are higher than every other part of the country.

“To increase the UK’s national level of productivity will require everywhere to improve: if productivity is only increasing in London, this will be no more sustainable than a plane flying on just one engine, either politically or in terms of economic growth.

“Productivity has an impact not just on the economy, but on people’s quality of life. Further devolution of powers is urgently needed to deliver sustained improvements in living standards for the people of Greater Manchester.”

Fellow review panellist, Senior Executive Editor for Economics & Head of Bloomberg Economics, Stephanie Flanders, said: “Whitehall and Westminster may be preoccupied with Brexit, but with this report Greater Manchester is getting on with the challenge of building a more inclusive and dynamic local economy.

“Greater Manchester is not the only city in the UK to suffer from low productivity and poor skills, but its leadership has been consistently ahead of the curve in forensically analysing the economic and social roots of these problems in the context of the broader local economy.

“With the INER and now this follow-up review I think Greater Manchester has once again demonstrated the value of more place-oriented policy-making, especially in areas such as skills.

“Delivering better outcomes for people is not going to be easy but without a more grown-up relationship between central and local government I suspect it’s downright impossible.”