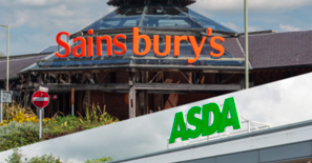 Walmart’s Leeds-based subsidiary Asda and Sainsbury’s on Tuesday committed to deliver £1 billion of annual price cuts as they attempt to salvage their proposed merger.

Last month, the UK’s competition regulator the Competition and Markets Authority (CMA) delivered a potentially fatal blow to Sainsbury’s proposed £7.3 billion takeover of Asda, saying it was unlikely the companies would be able to address its “extensive” concerns about the deal.

Asda and Sainsbury’s also said on Tuesday they were prepared to divest some supermarkets and petrol forecourts across both brands.

Sainsbury’s CEO Mike Coupe and Asda CEO Roger Burnley said: “We are trying to bring our businesses together so that we can help millions of customers make significant savings on their shopping and their fuel costs, two of their biggest regular outgoings.

“We are committing to reducing prices by £1 billion per year by the third year which would reduce prices by around 10% on everyday items.

“We are happy to be held to account for delivering on this commitment and to have our performance independently reviewed and to publish this annually.

“We hope that the CMA will properly take account of the evidence we have presented and correct its errors.

“We have proposed a reasonable yet conservative remedy packageand hope the CMA considers this so that we can deliver the cost savings for customers.”

In a long stock exchange statement on Tuesday, Sainsbury’s said: “J Sainsbury plc and Asda Group Limited have recently submitted to the Competition and Markets Authority (CMA) their responses to the CMA’s Provisional Findings and Notice of Proposed Remedies.

“Sainsbury’s and Asda strongly disagree with the CMA’s Provisional Findings and have found the CMA’s analysis of their proposed merger to contain significant errors.

“This is compounded by the CMA’s choice of a threshold for identifying competition problems that does not fit the facts and evidence in the case and that is set at an unprecedentedly low level, therefore generating an unreasonably high number of areas of concern.

“In their detailed response to the Provisional Findings, Sainsbury’s and Asda have sought to address these economic and legal errors.

“Sainsbury’s and Asda have also responded to the Notice of Proposed Remedies by outlining supermarket and petrol forecourt divestments across both brands that would satisfy reasonable concerns regarding any substantial lessening of competition as a result of the merger by applying a conservative yet reasonable threshold.

“In addition, Sainsbury’s and Asda have made the following post-merger commitments:

·        To deliver £1 billion of lower prices annually by the third year post-completion.  To invest £300 million in the first year of the combination and a further £700 million over the following two years as the cost savings flow through. This would reduce prices by around 10% on everyday items

·        Sainsbury’s will cap its fuel gross profit margin to no more than 3.5 pence per litre for five years; Asda will guarantee its existing fuel pricing strategy

·        The price commitments will be independently reviewed by a third party and the Parties will publish the performance each year, holding them to public account

“Sainsbury’s and Asda have given the detail of their estimated £1.6 billion cost savings to the CMA.

“This allows them to fund the £1 billion customer price commitment while also delivering on the commitments to shareholders of £500m of net synergies, low double digit ROIC (return on invested capital) and double digit EPS accretion by the end of the second full financial year.

“Sainsbury’s and Asda strongly encourage the CMA to recognise that there is a clear benefit to consumers from combining the two companies, improving the cost of living for millions of UK households to the tune of £1 billion pounds annually.”