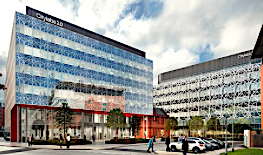 Manchester Science Partnerships (MSP) has hailed a “year of strong progress” with levels of investment and growth reflecting strong demand from new and existing customers.

At Alderley Park, profits increased from £7.5 million to £19.4 million during the year, which also saw the announcement of £10 million of investment in the development of new laboratories for smaller life science businesses.

The period also saw the creation of Bruntwood SciTech — the UK’s largest property portfolio dedicated to driving the growth of the science and technology sector — in a landmark equity deal between MSP majority shareholder Bruntwood and Legal & General.

Bruntwood SciTech announced pre-tax profits of £53 million together with shareholders’ funds of £234 million.

Bruntwood SciTech has plans to grow the value of its portfolio from £330 million to more than £2 billion in the next 10 years.

Tom Renn, Managing Director, MSP said: “Against a backdrop of significant uncertainty in the wider economy, in particular for those working in the science sector, we are heartened by the extraordinary resilience of our customers and of the science community in the UK, who have  continued to successfully raise investment and grow their businesses at pace both within our portfolio and across Greater Manchester.

“Construction of Citylabs 2.0 for QIAGEN, a world leading international molecular diagnostics company, who have taken a 100% pre-let, is a hallmark of that success and reinforces the quality of the Greater Manchester offer, partnerships and assets.

“Citylabs will be at the heart of a new globally-leading genomics and precision medicine campus which will create over 1,500 high value jobs and add over £150m to the Greater Manchester economy, and importantly benefit the 2.8 million people living here as new tests and treatments emerge.”