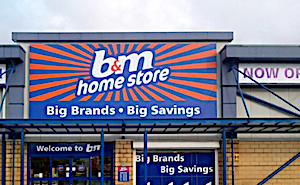 Full year ordinary dividend will be 7.6p per share, an increase of 5.7%.

Meanwhile, B&M’s CEO Simon Arora chief played down speculation that the company might attempt a reverse takeover of Asda in the wake of the UK regulator’s decision to block a takeover of Asda by Sainsbury.

Arota told reporters that while he would not comment directly on market speculation, B&M does not need M&A for growth.

“We opened 50 stores last year so at that rate we have got six years of growth,” he said.

Arora said in a stock exchange statement: “B&M has again delivered strong results against the challenging backdrop of continued structural change in our industry, rising costs and uncertain times for consumers, demonstrating that its value credentials remain as resonant as ever with customers, whether they need a bargain or just enjoy one.

“We have made important progress in establishing platforms for further long term expansion in both Germany and France although there is much work to be done to implement the disruptive, value-led B&M model in these large new markets.

“We enter the new financial year with renewed trading momentum particularly in the UK, a high quality new store expansion programme in place, and investing in our new infrastructure to support future growth.

“I’m confident B&M is well-positioned to deliver further strong progress in the current year and beyond.”