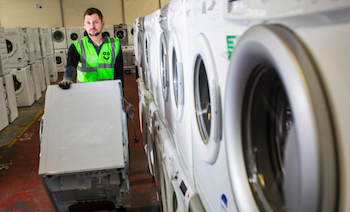 Shares of Bolton-based online electrical retailer AO World fell about 7% on Tuesday after it said problems in its European business have been overshadowing growth in the UK.

Announcing its first annual results since founder John Roberts returned as CEO, AO World also warned the UK’s current deadline to leave the EU at the end of October is the worst possible timing for the country’s retail sector.

“In terms of the impact around Christmas and Black Friday then from a retail point of view to have such a major consumer impacting decision at that time is about as far from ideal as anybody could possibly write,” Roberts told reporters.

AO founder and CEO John Roberts said: “We’ve delivered double digit revenue growth in the UK and achieved over 30% in Europe and adjusted EBITDA in the UK has improved by over 20%.

“The UK result was achieved against an ongoing tough trading environment and includes three months contribution from Mobile Phones Direct which we acquired in December 2018 and its integration continues to go to plan.

“Adjusted EBITDA losses in Europe have increased slightly against the prior year with progress hampered somewhat by driver challenges in Germany and a lack of real improvement in product margin and customer acquisition costs.

“We are working to address these issues.

“We’ve also made changes to the management of our international operations and are ensuring we utilise all the influence, intelligence and capability within AO.

“The AO model is an eco-system of complementary competencies across retail, mobile, recycling and logistics through to financial services and B2B trade.

“We have huge structural advantages when these capabilities operate in harmony.

“So, we have enhanced structure with informality and a renewed mindset and are now releasing the immense unrealised value we’ve created.