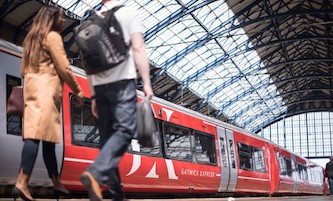 Shares of Newcastle-based bus and rail giant Go-Ahead Group surged more than 10% on Thursday after it reported a strong trading update for the period from December 30, 2018 to June 5, 2019.

The rail operation, Govia, is 65 per cent owned by Go-Ahead and 35 per cent by Keolis.

Govia is the largest rail operation in the UK, responsible for over 30% of all UK passenger rail journeys.

Go-Ahead Group CEO David Brown said: “I’m pleased to report that we have delivered revenue growth in all three of our business divisions …

“Service levels also remain high in our regional bus business, which recently achieved the industry’s highest ever customer satisfaction score of 92%, with Go-Ahead topping the league table for punctuality and journey time.

“In rail, Southeastern remains the best performing large UK train franchise, with the highest levels of punctuality in its history.

“Service levels at GTR continue to improve with punctuality for the month of April reaching 89.3%, a record level for the franchise, after nine consecutive months of year on year improvement.

“PickMeUp in Oxford is growing in popularity, with 25,000 people now registered to use our app-based service and over 130,000 journeys made since its launch in June 2018.

“On the back of this successful pilot, we have recently won a year-long contract from TfL across the borough of Sutton, in partnership with ViaVan.

“Our international bus operations in Singapore and Dublin are trading ahead of expectations, and we look forward to operating rail services in Germany from this weekend.

“Our international development teams continue to work on contract opportunities in our target markets and there is also a strong pipeline in these areas.”

The group has a fleet of around 5,000 buses, carrying over two million passengers every day.

Its bus division has a strong presence in London, with around 23% market share.