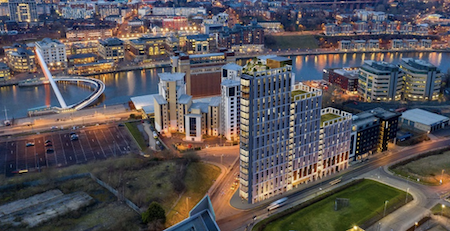 Proposals for a £60 million hotel and apartment development have been given the go ahead by Gateshead Council’s planning committee.

Liverpool-based Elliot Group submitted the plans for the erection of a building consisting of 202 hotel rooms and 244 serviced apartments on the corner of Hawks Road and Mill Road, adjacent to Gateshead’s new waterfront arena.

The northern section of the building will contain the serviced apartments, with the southern section allocated for hotel use.

The apartments will be of mixed sizes, with 23 studios and a rooftop garden included in the proposals.

A gym is proposed for the residents of the apartments, while the hotel will connect to a large bar and restaurant space.

Elliot group’s original plans for a mid-rise apartment tower were scrapped in response to the Gateshead Quays project, which will see a new arena, convention centre and associated leisure offer built on a neighbouring site between the Sage and the Baltic Centre for Contemporary Art.

The site, which is now cleared following the demolition of existing office and warehousing buildings, sits on the upper edge of Tyne Gorge, near Gateshead College.

“Gateshead Quays is a game-changer and we amended our original proposals in light of its progress,” said Elliot Lawless of Elliot Group.

“The scheme is stepped at 10, 16 and 21 storeys to exploit the stunning views across the river towards Newcastle’s skyline. It’s an utterly absorbing view.”