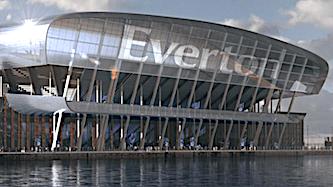 Everton Football Club has revealed the results of its extensive public consultation into designs for a proposed 52,000 capacity stadium at Liverpool’s Bramley-Moore Dock and outline proposals for a community-led legacy project at Goodison Park.

Analysis of the data has revealed that 96% of the 43,039 respondents want The People’s Project – the combined stadium development plan and redevelopment of the Goodison Park site — to continue and that eight out of 10 non-Evertonians also support progression of the plans.

In what is believed to be the largest commercial public consultation in Liverpool’s history, the results show 98% support for the design of the club’s 52,000-seater stadium, which will form part of Peel L&P’s £5.5 billion Liverpool Waters development, and 92% support for Everton’s outline design for the redevelopment of Goodison Park.

In addition, 91% of responses support the proposed mix of uses and scale of development at the club’s current home to create a community-led legacy that could include new homes, health, education, youth and business facilities.

The second stage of The People’s Project public consultation ran during July and August 2019 and included a 19-day touring exhibition that visited 12 locations across all six Liverpool City Region boroughs.

The consultation also sought views on the plans for transport, heritage and the environment as part of the project.

Professor Denise Barrett-Baxendale, chief executive of Everton, said: “These results are a huge vote of confidence in our continuing plans for all aspects of The People’s Project.

“This is a really important milestone and having the level of support we have from the Liverpool City Region public means we can submit for planning before the end of this year with confidence.

“The opinions, ideas and observations we’ve received will be used by the project team to inform the next steps of the project — as well as being included as part of our final planning applications.

“I’d like to thank everyone that has taken part and had their say on all our plans.

“The results demonstrate a real understanding of the potential impact of The People’s Project.

“A proposed new Everton stadium at Bramley-Moore Dock will provide the football club with a platform for growth and is vital to our long-term vision.

“It also has the potential to deliver a £1bn boost to the city’s economy and up to 15,000 new jobs with £34m of income going to local families.

“In addition, The People’s Project will attract 1.4m new visitors to the city on an annual basis and deliver £237m of additional societal value.

“This will be transformational, not only for Everton Football Club but also for North Liverpool and the wider city region.”