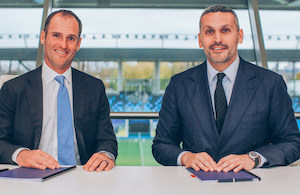 The investment is equivalent to just over 10% of the company’s post-investment value and the deal values City Football Group at $4.8 billion post-investment, making it the world’s most valuable soccer group.

The company has more than 2,000 employees in 12 locations globally, overseeing more than 1,500 players and 2,500 games annually.

Chinese investors paid $400 million for a 13% stake in CFG four years ago, valuing the group at $3 billion at that time.

Man City’s rival Manchester United is majority owned by the American Glazer family and is valued at around $2.8 billion.

“The proceeds from the investment will be used by City Football Group to fund international business growth opportunities and develop further CFG technology and infrastructure assets,” said CFG and Silver Lake in a statement..

“No existing CFG shareholders are selling equity as a result of this primary capital investment.

“Pursuant to the agreement, the board of the City Football Group Holding Company will increase from eight to nine members.

“Mr. Egon Durban, a Managing Partner and Managing Director of Silver Lake, will represent Silver Lake as the ninth CFG board member.”

Khaldoon Al Mubarak, chairman of City Football Group said: “Silver Lake is a global leader in technology investing, and we are delighted by both the validation that their investment in CFG represents, and the opportunities for further growth that their partnership brings.

“We and Silver Lake share the strong belief in the opportunities being presented by the convergence of entertainment, sports and technology and the resulting ability for CFG to generate long-term growth and new revenue streams globally …

“We welcome the opportunity to work with Egon and the Silver Lake team and its network to facilitate the global growth and deepening of CFG Club fan-bases and the development of our business as a whole.”

Durban said: “We are excited to invest in CFG, which is redefining soccer globally and in doing so has successfully built an impressive global platform of marquee soccer clubs across five continents.

“We greatly respect CFG’s stewardship of more than a century of soccer tradition and the strong global fanbases of its clubs.

“We are excited to partner with the board and CFG’s world-class management team to help drive the next phase of CFG’s growth in the fast-growing premium sports and entertainment content market.”

The transaction is subject to customary closing conditions including regulatory approval in some territories.