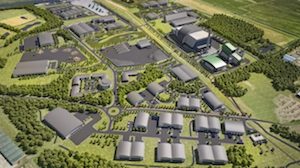 Manchester-based waste and infrastructure business Peel Environmental – part of Peel L&P – said on Monday the UK needs to invest over £7.5 billion in infrastructure to deal with plastic waste over the next 10 years.

The company has set out its vision for “Plastic Parks” across the UK which would it said would “revolutionise” the way that plastic waste is currently handled.

“The parks would provide a complete solution for the 4.9 million tonnes of plastic waste generated in the UK each year, preventing it ending up in landfill, exported overseas or in the ocean,” said Peel.

“With the first one planned for Peel Environmental’s Protos site in Cheshire, the Plastic Parks will deal with plastic waste where recycling has previously not been a viable option.

“They will take plastic that’s at the end of its life, maximising what can be removed for recycling, with the remaining non-recyclable plastic used to create electricity, hydrogen or other products.”

Working in partnership with Waste2Tricity, Peel Environmental said it has thrown its support behind pioneering waste plastic to hydrogen technology that is set to revolutionise the waste market while kick-starting the emerging hydrogen economy in the UK.

The company has signed an exclusivity agreement to deploy the PowerHouse Energy Group technology in the UK.

The first facility is set to be developed at Protos, as part of the first Plastic Park, having recently been granted planning consent.

Other technologies to feature at the Plastic Parks will break plastic back into its component parts to reduce reliance on virgin fossil fuels.

“With a network of Plastic Parks envisaged across the UK, each one can be tailored to local needs, providing local councils with the comfort that their plastic waste is being handled responsibly,” said Peel.

Peel Environmental managing director Myles Kitcher said: “Infrastructure for dealing with plastic waste has been piecemeal at best and there’s a huge problem with accountability.

“Local authorities and businesses often have no idea that their plastics are being exported overseas where it has more chance of finding its way into the ocean.

“It’s right that we should be having the debate about plastic, but we’re not going to rid it from society overnight.

“In many cases plastic will continue to be the most sustainable and cost effective option, for example its many uses in the medical industry.

“Rather than demonising all plastics, we need to reduce and re-use what we can, recycle after that and then find better solutions for what’s left.

“The technologies we’re looking at will provide solutions for plastics that up until now haven’t had a value.

“But we fully expect them to be transitional technologies which in the short term make a positive difference until we can reduce our plastic consumption.”