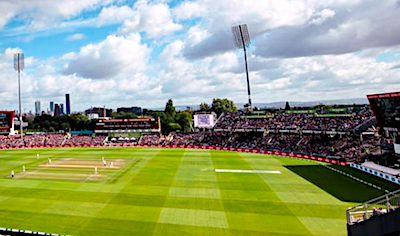 Lancashire Cricket Club said it reported the best-ever EBITDA for a First-Class County of £7.6 million in its annual financial report for the year ending December 31, 2019.

“The 2019 cricketing summer was dominated by the ICC Cricket World Cup and the Specsavers Ashes Test series, with Emirates Old Trafford hosting twelve days of top level cricket, including the second day of the CWC19 semi-final after the first day was rain-affected, each in front of 23,500 capacity crowds,” said the club.

“Following the £60 million decade-long redevelopment of Emirates Old Trafford, the club was able to maximise its revenue returns from these high-profile fixtures across the summer.

“Lancashire Cricket also saw a remarkable growth in last summer’s Vitality Blast attendances, increasing ticket sales by 34 per cent over the course of the campaign, compared to 2018.

“The club sold out the Roses Match against local rivals Yorkshire for the sixth year in a row and broke the record attendance for a non-Roses three times during the season.

“The club also achieved challenging budgets for sponsorship and combined hotel and conference and events sales.

The club said returns from international cricket were supplemented by £8.4 million of revenue from conference and events activity at Emirates Old Trafford with the Hilton Hotel, in its second full year of trading, growing its average annual occupancy from 71% to 78%.

“On the field, following the disappointment of relegation in 2018, the team bounced back with an undefeated campaign leaving them as runaway Second Division County Champions,” said the club.

“Lancashire made it through the group stages of the Royal London One-Day Cup before being defeated by Hampshire in the semi-final.

“The team bowed out in the quarter-finals of the Vitality Blast, beaten by the eventual winners of the competition, Essex.”

The club also secured new long-term banking facilities with Metro Bank plc and in doing so consolidated all its existing debt, “significantly extending the repayment profile” and reducing its annual interest burden.

For the first time since 2010, the club has returned to a positive reserves balance of £1.7 million.

Lancashire Cricket chief executive Daniel Gidney said: “2019 was a landmark year for the club when years of investment in talent and the infrastructure of Emirates Old Trafford was rewarded and truly reflected in our financial results.

“I’m delighted that all key business streams performed ahead of expectations.

“To generate in excess of £30 million of non-broadcast revenues is truly remarkable and, to put it in perspective, better than some Premier League Clubs.

“These results are a record for published accounts, excluding minority interests and legacies, for any First-Class County and make this a proud day for the Red Rose.

“Clearly, these are now tough times as the club navigates its way through the current COVID-19 pandemic, but these results at least help relieve that financial burden.

“Our priority now is to work with our stakeholders to find a way for cricket to return as quickly as it is safe to do so.

“This will help us protect future revenues as much as possible and allow us to continue to invest in our infrastructure for the benefit of our members and supporters.

“I would also like to personally thank all of Lancashire Cricket’s stakeholders for their continued and overwhelming support, not only in the last few months, which of course have been hugely challenging for everyone involved with the club, but also over a number of years too.”

Finance director and club secretary Lee Morgan added: “The club, through its re-financing with Metro Bank, its record 2019 revenues and raised level of core underlying trading, has created the best platform possible to manage and survive the uncertainties created globally by COVID-19.

“The club has the venue in Emirates Old Trafford, talented people and recent track record of trading to demonstrate that, as well as being a much-loved local sporting institution, it is also a strong viable business with a platform that will enable us to return to our growth trajectory once we have navigated through the current crisis that is impacting our society, sport, leisure and events within that, so deeply.”