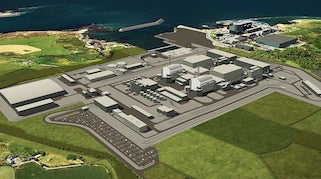 Japan’s Hitachi, Ltd. said on Wednesday it will end business operations on its UK nuclear power plant construction project — including a £15 billion nuclear plant at Wylfa Newydd in Anglesey, North-West Wales — which was suspended in January 2019.

The plant would have created thousands of jobs.

Hitachi expressed its “deepest gratitude” to the UK government, the Wales government and residents, the Japanese government and other stakeholders “for their continued support and cooperation.”

“Hitachi made this decision given that 20 months have passed since the suspension, and the investment environment has become increasingly severe due to the impact of COVID-19,” said the company.

Anglesey Council Leader Llinos Medi said: “This decision is a devastating blow to the Anglesey economy.

“The Wylfa Newydd project had the potential to transform the Anglesey and North Wales economy, particularly that of North Anglesey.

“The County Council, through its Energy Island Programme, had worked closely with both UK and Welsh Governments and other key stakeholders over a number of years to facilitate the Wylfa Newydd project.

“Whilst Energy Island continues to work with other energy developers – the Wylfa Newydd project was seen as a huge enabler to create substantial jobs and supply chain opportunities.”

Medi added: “I will now be calling for an urgent meeting with both UK and Welsh Governments to discuss the future of the Wylfa Newydd site.”