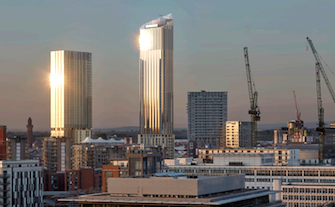 Manchester-based residential property developer One Heritage Group has announced its entire issued ordinary share capital has been admitted to the standard listing segment of the official list of the London Stock Exchange’s main market for listed securities under the ticker OHG.

One Heritage said it raised £930,000 via a combination of a subscription and a placing with Hybridan of a total 9.3 million new ordinary shares with investors at 10p per share.

One Heritage’s market capitalisation at the placing price on admission is £3 million.

“Co-living properties will be sold on the open market primarily to investors through the group’s marketing network in Hong Kong,” said One Heritage.

“The group will undertake its activities by deploying a design approach and L&PFM (letting and property and facilities management) service levels that are attractive to younger socially mobile professionals and those seeking more flexible living arrangements.

“The directors consider that the product range of self-contained apartments and co-living accommodation, allied with high quality L&PFM services, will provide a broad appeal to this demographic group.

“The initial geographical focus of the Group’s activities will be primarily high demand areas in the North West of England.

“This demand will be underpinned by strong economic and employment growth in Manchester, which is forecast to be one of the UK’s strongest performing cities over the next few years according to Ernst & Young LLP’s Regional Economic Forecast.

“Data from the Office of National Statistics, predicts that the growth in the number of households in Greater Manchester between 2020 and 2038 will be 10.4 per cent. compared to 7.4 per cent. over the previous 10 years.

“This increased demand is twinned with structural undersupply of housing which, over the last 10 years, has shown that the number of net new dwellings is 15 per cent. less than the growth in households with the Greater Manchester Economic Forecasting Model showing an increase in employment of 10.7 per cent. over the same period.

“The group will focus on edge of city centre locations where there are good transport links or where there is a major local employer to underpin demand allowing a high-quality housing product to be delivered at a competitive price point.

“Over the next three years, the company intends to expand its activities to other locations throughout the UK that demonstrate similar characteristics to those currently identified in the North West of England, such as in Yorkshire and the East and West Midlands.”