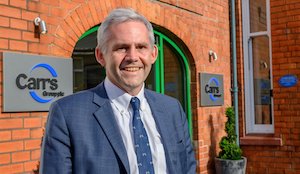 Shares of Carlisle-based agriculture and engineering firm Carr’s Group rose about 5% on Tuesday after it published a “robust” trading update for the 19-week period ended January 9 to coincide with its AGM that showed it made a positive start to the year with trading in line with expectations.

However, Carr’s received a setback when 45.47% of shareholders at its AGM voted against its directors’ remuneration report.

“The agriculture division is trading ahead of the board’s expectations,” said Carr’s.

“The supplements business has seen strong global demand in the period, driven by resilient cattle prices in the USA and increased exports into the Republic of Ireland.

“Trading in the UK agriculture business is as expected.

“Whilst good progress continues to be made on projects in the nuclear and defence sectors, there has been an impact from the reduction in oil and gas investment due to the weakened oil price, leaving performance in the engineering division behind the board’s expectations.”

At the conclusion of the AGM, Hugh Pelham succeeded Tim Davies as CEO.

Carr’s Group chairman Peter Page said: “The board is encouraged by the robust performance of the business in the first four months of the year.

“The essential nature of our products and services enables us to maintain trading relationships in challenging circumstances.”

On the shareholders’ revolt, Carr’s said: “The board notes that although resolution 13, to approve the directors’ remuneration report, was passed, 45.47% of votes cast were against.

“During 2020, the remuneration committee wrote to the company’s largest shareholders in relation to proposed changes to its remuneration policy and a review, supported by benchmarking, of the base salaries of the company’s executive directors.

“The company also engaged directly with a number of shareholders prior to the AGM.

“The company will consult further with shareholders to better understand their views and provide an update within six months as required by the Corporate Governance Code 2018.

“The board is always open to constructive dialogue with shareholders and is grateful to all those who took the time to consider and vote on the resolutions proposed.”