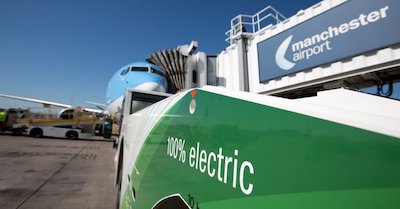 Manchester Airport said on Friday it will become the first airport in the UK to have a direct sustainable jet fuel supply through partnership with Fulcrum BioEnergy Limited UK.

Manchester Airports Group (MAG) – the owner of Manchester, London Stansted and East Midlands airports — has signed a Memorandum of Understanding with Fulcrum, which will support the development and delivery of SAF (sustainable aviation fuel) produced at a new waste to fuels biorefinery, in Stanlow, Cheshire.

“Fulcrum is a pioneer in the conversion of non-recyclable residual wastes into sustainable fuels,” said MAG.

“The new biorefinery, Fulcrum NorthPoint, is part of wider plans to establish the North West as the leading producer of SAF in the UK …

Fulcrum and MAG’s partnership could see up to 10% of the fuel used by aircraft at Manchester Airport replaced with SAF within five years of the Fulcrum NorthPoint facility becoming operational.

The partnership will provide airlines operating from Manchester Airport – the UK’s third busiest airport – the ability to use SAF to help toward the decarbonisation of their flights.

Neil Robinson, MAG CSR and Airspace Change Director said: “Today really is a landmark moment in our journey towards a decarbonised aviation sector.

“By working towards a future supply of SAF, direct to Manchester Airport via existing pipelines from a local refinery, we’re making sustainable operations accessible for airlines based here.”

“The introduction of SAF is testament to the innovation we have seen, and the collaboration between airports, airlines, the Government and suppliers like Fulcrum to achieve real progress towards our goal of Net Zero for UK aviation by 2050.

“We are committed to ensuring that this progress continues through our role on the Government’s Jet Zero Council, on Sustainable Aviation and through our own targets in our CSR Strategy where we’re working to becoming Net Zero at our airports by 2038.”

Fulcrum NorthPoint will produce approximately 100 million litres of SAF per year – which when blended 50/50 with traditional jet fuel, could fill the fuel tanks of approximately 1,200 Boeing 777-300s.

The fuel produced will have a CO2 footprint at least 70% lower than that of its traditional jet fuel equivalent and will be produced from residual household and commercial wastes, which would otherwise be destined for landfill or incineration.

Jeff Ovens, Fulcrum Bioenergy Limited UK Managing Director, said: “Support for SAF in the UK has reached new heights and the development of the Fulcrum NorthPoint SAF facility in Cheshire will bring significant volumes of much needed low carbon fuel for airlines, either those based here in the UK, or flying in from overseas.”

“Our partnership with MAG as an airport operator will bridge airlines and fuel suppliers and make SAF accessible and more widespread within the sector.

“This collaboration will also support our ambition to cementing the North West as a centre for excellence for SAF in the UK, driving forward the Prime Minister’s 10 point plan for an industrial revolution.

“The aviation industry is working hard towards the Net Zero 2050 target, and through our joint work on the Jet Zero Council alongside the Government, SAF will play an integral role in achieving it.”