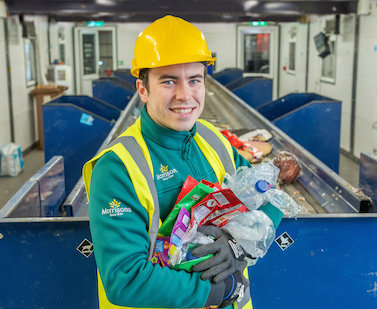 Bradford-based supermarket giant Morrisons has announced it will become the first supermarket to own its own recycling operations through the acquisition of a significant stake in a new recycling site in Glenrothes, Fife.

“The Fife site is the first of its type in the world,” said Morrisons. “It is co-owned and being constructed by recycling plant specialists Yes Recycling.

“The plant will turn hard-to-recycle flexible food packaging into plastic flakes, pellets and boards. At current capacity, the site will take 15,000 of tonnes of flexible plastic packaging a year.”

The hard-to-recycle soft plastic — including chocolate wrappers, crisp packets, and food film — will be sent to the site from Morrisons distribution sites and by Cireco Scotland who process kerbside collection material.

In the past, this material may have gone to a landfill or been incinerated for energy.

Morrisons is also looking at ways to use the recycled material from the site for a range of applications, including store fixtures and fittings.

In addition, new Ecosheets — an environmentally friendly alternative to plywood — are being manufactured at the site for use in the agriculture and construction industry.

Morrisons procurement director Jamie Winter said: “Lots of work has been done by retailers to reduce plastic, but little to recycle what remains.

“We’re taking on that challenge and making a significant investment in a state-of-the-art soft plastic recycling site.

“It’ll take problematic plastics, recycle them here in the UK, and give them a new life.

“And by 2025 we want to increase our capability to be able to recycle and reuse the equivalent amount of plastic we put out on to the market within our own facilities.”

“It is a blueprint for the future and will help to kick-start the UK’s plastics recycling industry. It will mean we can keep plastic in our own country’s ‘circular economy’ and out of our seas and oceans.”