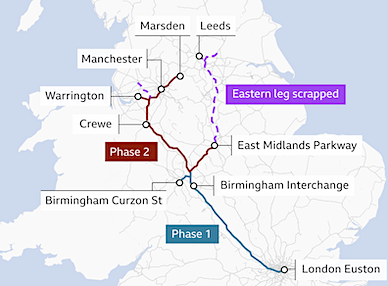 The UK government has broken a promise to link Leeds and London as part of its new £96 billion high-speed rail network HS2.

The axing of a new East Midlands-Leeds leg of the HS2 plan, with HS2 trains now scheduled to run on existing upgraded routes — and a scaling back of the Northern Powerhouse Rail (NPR) project — were strongly condemned.

UK Labour leader Keir Starmer said Mr Johnson had “ripped up” promises he made that HS2 would go all the way to Leeds and that there would be a new NPR line from Manchester to Leeds.

“This was the first test of ‘levelling up’ and the government has completely failed and let down everybody in the North. You can’t believe a word the Prime Minister says,” said Starmer.

UK transport secretary Grant Shapps confirmed that the eastern leg of HS2, which would have connected Birmingham and Leeds, would be mostly scrapped.

That part of the line will now only run as far as East Midlands Parkway near Nottingham.

Shapps delivered his Integrated Rail Plan for the North and the Midlands in the Commons.

“After decades of underfunding, the rail network in the North is not fit for purpose.

“It is largely twin-track Victorian infrastructure trying to cope with the demands of a 21st Century economy.

“Our statutory advice asked for an over £40 billion network but the Government has decided to provide even less than half of that.

“The leaders of the North, jointly with Government, have worked hard to come up with an evidence-led plan to help reverse the chasm of under investment over the last four decades to give passengers in the North a railway network fit for today and for generations to come.

“That doesn’t mean a bit here and a bit there of minor upgrades to the existing network. It means transformational change for the whole rail network.

“That means building HS2 and Northern Powerhouse Rail in full.

“That means good east-west connections, improved reliability and a better customer experience to bring about modal shift to meet our decarbonisation strategy.

“Whilst we have been working on our upgrade plans we have watched as billions have been poured into HS2 building work from London to Birmingham.

“We have watched as billions have been poured into Crossrail (in London) being dug out and built across the capital. It is time for the North to have its fair share.

“It’s time for the North to have a proper railway network to allow our towns and cities, our businesses, and our people to thrive and grow for generations to come. It’s time for real evidence of levelling up.

“If we truly want to level up the country we don’t need words and promises. We need commitment. We need investment.

“We need Government to make good its pledge to the North and to deliver funding so we can deliver value back into UK PLC.

“We will be studying today’s Integrated Rail Plan announcement closely and will consult with our TfN Board before giving our considered response.”