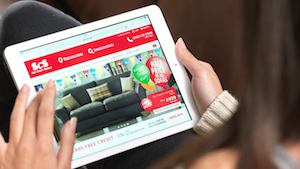 Shares of Sunderland-based furniture and floorings retailer ScS Group fell about 9% on Friday after it published a trading update for its AGM showing a one-year like-for-like order reduction of 10.6% “following an unprecedented period of pent-up demand at the beginning of the prior year.”

The update also showed that over the last seven weeks, ScS has seen a reduction in store footfall and conversion with consumers spending less on big ticket discretionary purchases.

“As previously reported, the group had a strong start to the year, resulting in two year like-for-like order intake growth for the first nine weeks.

“However, over the last seven weeks, the group has seen a reduction in store footfall and conversion with consumers spending less on big ticket discretionary purchases.

“This appears to be driven by a change in behaviour with consumers shopping earlier for Christmas when compared with previous years.

“The extended product lead times currently being experienced across the furniture and wider retail industry are also having an impact on current purchasing trends.

“Our online business, which is a key part of our ongoing strategy for growth, continues to perform well, with two-year like-for-like order growth for the first 16 weeks of the year of 38.5%.”

On outlook, Smith said: “The group is now preparing for the winter sales trading period, and whilst it remains difficult to predict shopping habits and consumer engagement, the business is planning to approach this key period in a manner consistent with that which has proven successful in previous years.

“We continue to work closely with our existing suppliers to mitigate current supply chain challenges.

“To broaden our customer proposition, we have recently partnered with new UK suppliers so that we can offer furniture on shorter lead times.

“We believe our continued focus on a promotional, value-led proposition will remain attractive to our target market and the board looks forward to the future with continued confidence.”