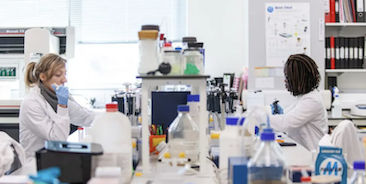 Shares of York-based life sciences firm Aptamer Group plc rose as much as 20% on Wednesday when the company’s stock started trading on the AIM market of the London Stock Exchange.

“The group has today completed its placing to raise gross proceeds of £10.8 million at the placing price of 117 pence per share,” said Aptamer.

“At the placing price, the company’s market capitalisation on admission is approximately £80 million.”

According to Bloomberg data, Aptamer’s shares immediately rose about 20% to around £1.41 to give the firm a stock market capitalisation of almost £100 million.

Aptamer describes itself as “a leader in the provision of aptamer discovery services and the development of aptamer-based reagents.”

The group said it “solves intractable problems for biotech and big pharma by developing molecular binders called aptamers, as an alternative to antibodies which fail to perform 50% – 60% of the time.”

Aptamer said it has developed novel, proprietary aptamer technology known as Optimer binders “which offer further performance and commercial benefits in addition to those of standard aptamers.”

The group said it has an “existing blue-chip customer base and has supplied or collaborated with 75% of the global top 20 pharmaceutical companies and has seen organic revenue growth of 400% over the past four years, with upfront deal values ranging from £50,000 to £3.8 million.”

It said aptamers are “a disruptive technology and next generation affinity ligand in the well-established global antibody market, which is worth over $145.7bn per annum (2021) and expected to reach $248.9bn by 2026.”

Aptamer Group CEO Arron Tolley said: “Today is an important milestone for Aptamer and I am delighted that the group has commenced trading on AIM.

“This listing marks an important step in our journey as we solidify our position as the leading provider of aptamer discovery and selection services and the development of aptamer-based reagents.

“I would like to thank our new and existing shareholders for their support and our hard working and dedicated staff and customers for helping build Aptamer Group into the business it is today.

“I look forward to providing updates on our progress in the months and years ahead.”