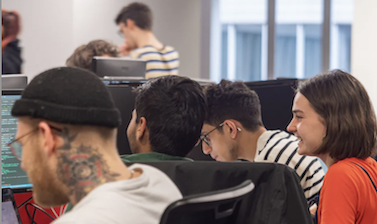 Shares of Manchester, Leeds and Newcastle-based Northcoders, the provider of training programmes for software coding, rose as much as 9% on Tuesday after it published a strong trading update for the year ended December 31, 2021.

Northcoders said it is planning to open new training hubs and expand its partnerships with major employers in the coming months.

“The group has delivered a strong result,” said Northcoders.

“Underlying performance was in line with expectations and, as previously reported, cashflow benefitted from the additional course funding available from the group’s contract under the Department for Education’s ‘Lifetime Skills Guarantees’ and ‘Plan for Jobs’ initiatives, secured in July 2021.

“Non-underlying costs are expected to be lower than expectations and therefore the reported result will be ahead of market expectations.

“Revenue visibility for the new financial year to December 2022 stands at just over £3 million.

“Consumer demand for the group’s core boot camp courses is growing strongly and we are pleased to report that the group has now commenced its largest ever cohort with more than 100 students starting the course this month.

“With the benefit of increased marketing spend and geographic presence, the board expects this growth in demand to continue as Northcoders significantly expands its list of hiring partners with large organisations such as AND Digital Limited, Wren Kitchens Limited and Sky Betting & Gaming.

“A training hub in Newcastle has also been successfully opened to complement the group’s presence in Manchester and Leeds.

“Further hubs are planned to open in Birmingham and Liverpool over the next 12 months and we have received a special request from, Jason Stockwood, the chairman of Grimsby Town Football Club to establish a facility at their stadium, which is indicative of the potential for further growth.

“Furthermore, the group has also engaged with a new funding partner, Stepex Limited, allowing more students from a diverse range of backgrounds to benefit from the life-changing education that the Group provides.

“As the national reach of Northcoders has expanded, the group’s Apprenticeship division also delivered contracts across the breadth of England.

“An increasing number of large employers, such as online fashion retailer, Pretty Little Thing, and logistics company, Hermes, are seeing the benefit of engaging with Northcoders to deliver apprenticeship courses on their behalf.

“The group has also launched its new apprenticeship ‘hire to train’ programme which is proving to be very popular with both corporates and individuals alike.

“The group is also pleased to report that the Department for Education has advised that funding has been increased further, due to the successful delivery of student courses through the first funding round.

“This increase entails a further £1.65 million in funding for training courses to be delivered between February and September of this year.

“This is a credit to the team within Northcoders who, despite increased Covid restrictions, managed to award 294 training programmes at short notice on behalf of the Department for Education in the six months ending January 2022.