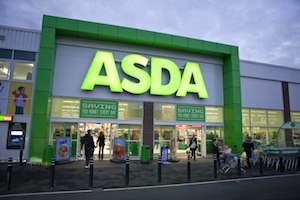 Leeds-based supermarket giant Asda said its like-for-like sales fell 9.2% to £4.641 billion during the quarter to March 31 compared to the “exceptional” same period of Q1 2021, which coincided with the UK’s third national lockdown and earlier Easter holidays.

“During the period, Asda’s like-for-like food sales stepped back 7% versus the prior year, reflecting a shift back into eating out of home following the easing of lockdown measures,” said the Leeds firm.

“However, the step back in sales versus the prior year was more strongly felt in clothing (19.3%) and general merchandise (23.7%) as sales in Q1 2021 benefitted from the closure of non-essential retail.

“With severe cost pressures facing consumers, Asda has invested over £90m in expanding its new Just Essentials value range and Dropping and Locking the price of over 100 family favourite products until the end of the year …”

Asda also announced it would increase the pay of its hourly paid shop floor staff from £9.66 to £10.10 per hour from July.

Asda said its latest Income Tracker revealed that UK households’ disposable income dropped by £40.38 per week year-on-year in April, the largest fall since the tracker was created in 2008, with income for those under 30 and over 75 most significantly impacted.

“Households were squeezed by the removal of Ofgem’s price cap, resulting in gas price inflation of 95% and electricity prices rising by 53% in April,” said Asda.

“The sharp rise in living costs has seen household disposable income fall to an average of £205 per week – the lowest figure since October 2018.”

“Asda has a strong heritage of investing in price and customers can trust us to be on their side when they need it the most.

“We are investing in helping our shoppers manage the challenges of the here and now, as well as progressing critical strategic initiatives including loyalty, convenience and enhancing our in-store offering, which will all deliver long-term value.”

Asda also confirmed that Ken Towle has joined the business as retail director, with responsibility for running the supermarket’s 640 stores.

“Ken has over 30 years retail experience with Tesco and more recently as CEO of the convenience chain Nisa,” said Asda.

“In the coming weeks, Ken will be joined on Asda’s executive management team by Kris Comerford, the new chief commercial officer for food.”