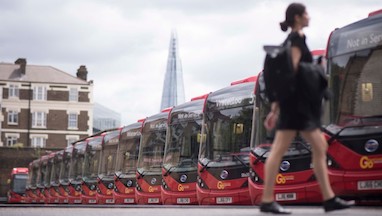 Shares of Newcastle-headquartered bus and rail giant Go-Ahead Group rose another 17% on Tuesday to around £15.88 after Australia-based transport firm Kelsian Group urged Go-Ahead shareholders to “take no action at this time” on an agreed £15-a-share offer from a rival consortium of Australia’s Kinetic Holding Co and Spain-based Globalvia Inversiones.

Go-Ahead agreed late on Monday to be bought by the consortium for about £648 million.

Go-Ahead had said on Monday morning it received two separate approaches regarding possible cash takeover offers that it “would be minded to recommend” should a firm offer be made.

“Kelsian Group Limited notes the announcement released on 13 June 2022 by Go-Ahead Group plc in accordance with Rule 2.4 of the UK City Code on Takeovers and Mergers regarding a possible cash offer by Kelsian for the entire issued and to be issued share capital of Go-Ahead,” said Kelsian.

“The Rule 2.4 announcement also referred to a possible cash offer for Go-Ahead from a consortium consisting of Kinetic Holding Company Pty Ltd and Globalvia Inversiones S.A.U.

“Kelsian further notes the announcement released later on 13 June 2022 by the consortium and Go-Ahead of a firm intention to make an offer for the entire issued and to be issued share capital of Go-Ahead by the consortium.

“Kelsian confirms that it has been in preliminary discussions with Go-Ahead in relation to a possible proposal for Kelsian to acquire all of the issued and to be issued share capital of Go-Ahead.

“Any such possible offer is likely to be in cash.

“Kelsian believes that the potential combination with Go-Ahead would create an international leader in multi-modal, mass transit supporting a sustainability agenda for its passengers and governments, with strong growth prospects.

“Kelsian believes that, if an offer is made by Kelsian, it could bring to bear its expertise across safety, operational efficiency, digital, decarbonisation, and experience operating in the UK to enhance and accelerate the growth of Go-Ahead creating substantial value for Kelsian shareholders as well as benefiting wider stakeholders including passengers, governments and employees.

“Kelsian continues to carefully assess the opportunity with a disciplined focus on the strategic and financial rationale.

“Kelsian therefore urges Go-Ahead shareholders to take no action at this time.

“There can be no certainty that a firm offer will be made nor as to the terms on which any firm offer might be made.

“If a possible cash offer by Kelsian is made in the future for Go-Ahead, there are a number of ways that this could be funded, however no decision regarding the appropriate funding mix has yet been made.

“Go-Ahead is headquartered in the UK and listed on the London Stock Exchange (GOG.LSE). A substantial percentage of the revenue of Go- Ahead is underpinned by contracts which include contractual inflationary uplift mechanisms or similar inflationary protection terms.

“Kelsian has had an established presence in the UK transport market for 10 years and knows Go-Ahead and the UK market well, having operated alongside Go-Ahead during that time.

“Kelsian’s Tower Transit subsidiary successfully operates a range of bus routes in London and Singapore and is a highly respected operator in both locations, working closely with Transport for London, the Land Transport Authority and other stakeholders to deliver safe, clean and reliable services to passengers.

“Go-Ahead holds a strong position in UK bus and rail markets, while Kelsian is a market leader in Australian bus and ferry services with established operations in London and Singapore.

“If combined, Kelsian believes the businesses would be expected to have industry leading capabilities and expertise, a broad operational footprint, and diversified earnings by geography and contracts.

“Kelsian considers various growth opportunities from time to time and is disciplined when it comes to mergers and acquisitions.

“Kelsian would only pursue an opportunity that is strategically and financially attractive for its shareholders, as well as aligning with Kelsian’s business model and operating culture.

“Kelsian has a track record of successfully acquiring, integrating and growing Australian and international businesses.

“A further announcement will be made as and when appropriate.