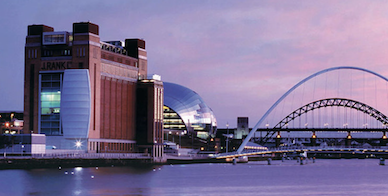 North East England has topped the list of UK regions for new job creation from inward investment successes, according to annual statistics by the the Department for International Trade (DIT).

That’s the highest number of inward investment jobs for any area outside of London.

These figures relate to the area covered by INEE – Northumberland, Tyne and Wear and County Durham (North East LEP area).

“This is a huge regional achievement shared among INEE, the region’s two combined authorities and seven local authorities and the Department for International Trade (DIT) who collectively have supported a large proportion of investment projects,” said Invest North East England (INEE).

“It has been an outstanding year for inward investment success in the North East – especially around the electrification sector – with US company Turntide Technologies investing £100m in acquiring Hyperdrive, Borg Warner Gateshead Division and Avid Technology.

“Envision AESC is currently building a new gigafactory at the International Advanced Manufacturing Park near Nissan, and, although not included in last year’s figures, Britishvolt is planning to create 3,000 new jobs at Cambois, Northumberland when its gigafactory is completed.

“There has also been an influx of over 500 digital jobs to Newcastle due to the expansion of four global technology companies – Thoughtworks, Arctic Wolf, Version 1 and Monstarlab.

“Global e-commerce powerhouse, Amazon, recently moved into its huge new base at Follingsby Max, Gateshead, creating over a thousand jobs for local people.

“The region’s offshore wind sector, world-renowned for its innovation and world leading technologies, continues to grow and the announcement that JDR Cable Systems will build a new facility in Northumberland to manufacture offshore wind farm cable, only strengthens the region’s reputation in the sector.

“The fact that JDR’s investment, along with the SSE/Equinor O&M facility at Port of Tyne, also in offshore wind sector, are not included in last year’s figures points to a further buoyant year for inward investment success in the region in 2022/23.

“Nissan has announced plans to create a flagship £1bn electric vehicle hub to coincide with the production of a new all-electric model in Sunderland.”