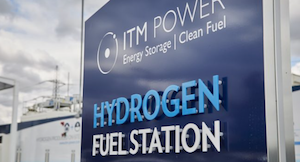 “The company and Graham are in discussion regarding their ongoing relationship which, whilst not yet formalised, is likely to take the form of a consultancy arrangement,” said ITM Power.

As previously announced, Dennis Schulz will immediately succeed Cooley as CEO of the green hydrogen firm as part of a planned succession process.

Schulz moves to ITM Power from Linde Engineering, a division of Linde plc, in Dresden, Germany, which is a 16.2% shareholder in ITM.

Schulz has been closely involved in ITM Power’s strategic relationship with Linde.

In order to provide Schulz with sufficient time to assess the company’s operations and identify his near-term priorities, ITM will defer its planned trading update, originally scheduled for December 8.

“The company expects to provide an initial strategic and operational update at the time of the half year results to be announced by the end of January 2023,” said ITM.

Cooley said: “Leading ITM Power over the last 13 years has been the greatest of privileges and I am immensely proud of the achievements of the team during my tenure.

“I warmly welcome Dennis to ITM Power and as a major shareholder I look forward to continuing to support the company in any way I can.”

ITM Power chair Roger Bone said: ” We remain highly appreciative of all that Graham has done as CEO over the last 13 years.

“He has immense experience and expertise in the hydrogen sector, and we look forward to drawing on that expertise as we move forward to the next stage of our development under Dennis’ leadership.”