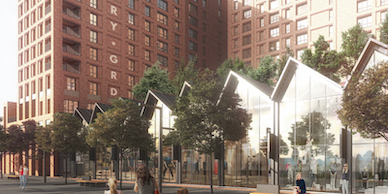 Salboy, the property development and funding company, has acquired the 52,700 sq ft former site of the Boddingtons Brewery on the northern edge of central Manchester for a major development.

“With a £195 million GDV, the mixed-use scheme will split across five buildings, including a 26-storey tower, all of which will comprise 556 new homes for sale and rent, 31,000 sq ft of commercial and retail space, and residents’ amenities that include rooftop terraces and landscaped gardens,” said Salboy.

“The scheme, which will be named in due course, forms a major part of Manchester City council’s long-planned, residential-led regeneration of the site that was home to the Boddingtons Brewery until 2005.

“The Council first published its strategic regeneration framework of this site in 2015.

“Located adjacent to the site of Manchester College’s new £100 million city centre campus, and in short walking distance of the city’s Northern Quarter, the scheme is expected to attract students and young people among whom demand for good quality accommodation in central Manchester has never been higher.”

Salboy MD Simon Ismail said: “We are delighted to be the new owners of the Boddingtons site – an ideal location for urgently needed regeneration thanks to its close proximity to city centre leisure, business, higher education and transport links.

“The future of this site has been the subject of local speculation for too long and we are excited to mobilise construction as soon as early 2023 to bring more sought-after homes to people who want to work, live and study in Manchester.”

The scheme will be built by Salboy’s dedicated construction partner DOMIS.