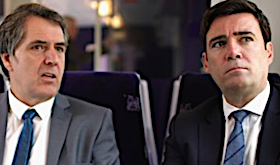 UK finance minister Philip Hammond on Monday convened the UK Government’s first meeting with all three Metro Mayors from the North of England to discuss the promotion of growth across the Northern Powerhouse regions.

These three areas alone have a population of five million and combined economy worth more than £102 billion.

“The government will continue to support the region through devolution and investment — including record amounts in transport, alongside support for skills and innovation,” said the UK Treasury.

“Ministers will shortly be announcing further funding to improve roads right across the North.

“The Chancellor is clear the Northern Powerhouse will have a key role in the Industrial Strategy and efforts to ensure Britain makes the most of the opportunities ahead as we leave the European Union.”

Hammond, the UK’s Chancellor of the Exchequer, said: “Boosting productivity in the North is at the very heart of the government’s ambition to build an economy that works for everyone.

“As we prepare to leave the European Union it is even more important that we support the Northern Powerhouse to reach its full potential.

“That’s why we are investing record amounts in infrastructure, and working with Metro Mayors to encourage growth and create opportunities throughout the North.”

However, after the meeting Burnham said: “He (Hammond) is certainly listening … however, I am afraid we did not get the answers we were looking for.

“We did not see the colour of his money .. we want to see clear commitments by the autumn [budget] to rail investment the north of England needs.”

The Chancellor said good progress is being made on a “housing deal” with Leeds, which could unlock thousands more new homes.

The UK’s Communities and Local Government Secretary, Sajid Javid, said: “I want to strike housing deals across the country to support councils’ ambitious and innovative plans for new homes, and to help boost supply where it’s most needed.

“We’re committed to considering all tools at our disposal, and by using our money more flexibly we can deliver more homes.

“As well as increasing housing, this will help grow local economies as part of our commitment to the Northern Powerhouse.”