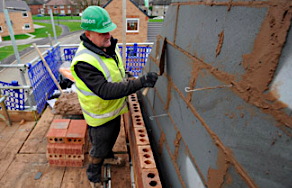 The division is now “comfortably” on track towards achieving its 2017 stated target of doubling housebuilding volumes to 2,000 new homes per year within five years.

“Gleeson Homes remained active in purchasing sites in both existing and new areas during the year …” said MJ Gleeson.

“Gleeson Homes is currently active on 65 sites and anticipates an increase to more than 70 sites during the coming year.

“A new pilot office was opened during the year in Ashington, Northumberland and the pilot office in Scunthorpe became a fully staffed area office.

“There are now eight area offices and two pilot offices.

“We will continue to grow the Gleeson Homes footprint by opening area offices in areas adjoining existing operations.”

MJ Gleeson said its Gleeson Strategic Land division, a land promotion business that enhances the value of land by securing mainly residential planning consents, predominantly in the South of England, sold 10 land interests comprising 335 acres during the year with the potential to deliver 1,970 plots for housing development.

“Nine sites with planning permission, or resolution to grant, have the potential to deliver 2,089 plots for housing development.

“Seven of these sites are in a process for sale. Planning decisions are expected on a further eight sites.

“The portfolio comprises 61 sites which could deliver 22,838 plots and 67 acres of commercial land.”

MJ Gleeson said it continues to generate “strong cash flows” and increased its cash balances at June 30, 2018, to £41.3 million from £34.1 million last year.

“We have a high quality land portfolio and quality always sells.

“We ended the year well on track to achieve our 2017 stated target to double house sales to 2,000 homes per year within five years.”