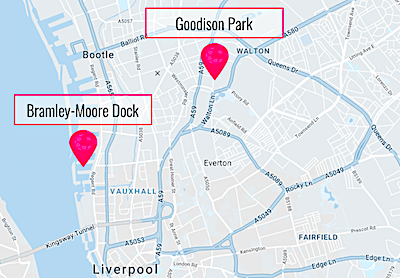 Everton Football Club announced on Thursday it is proposing a capacity of 52,000 for its new stadium, with the potential for this to rise to 62,000 in the future.

The proposed capacity and design of the new stadium at Bramley-Moore Dock will be subject to further public consultation and engagement with supporters during the design process, and with other stakeholders, including Liverpool City Council and Historic England.

“The projected capacity takes into account several factors which include design and orientation of the stadium on a dock site, current and future ticket demand and forecast revenues and costs,” said Everton.

“The stadium will also be ‘futureproofed’ for any changes in regulations in relation to ‘safe standing’.

“The design of two of the stands will make it easy to adopt a rail seating/safe standing solution, which will offer optionality and flexibility, should the law change in future.”

A widespread public consultation was held into the club’s plans for Bramley-Moore Dock, which is part of Peel Land and Property’s Liverpool Waters site, and the creation of a community-led legacy at Goodison Park, during which questions on the capacity of the new stadium were among the most frequently asked.

A second public consultation will be held in the summer when proposed designs of the stadium at Bramley-Moore Dock and an initial overview of proposals for Goodison Park will be presented.

Colin Chong, Stadium Development Director said: “There is still much work to do as we develop our plans and seek the views of our supporters and local communities as well as bodies such as Liverpool City Council, the Local Planning Authority and Historic England.

“At this stage, it is important to stress that this is our ‘proposed’ capacity and it is what we are currently working towards.

“It is important to emphasise that the final capacity and design will be subject to further engagement and consultation.

“We believe that our approach is the right one because it is commercially and financially sustainable and will mean that, in the long term, we will be able to increase the capacity should there be a demand and requirement to do so.

“Extensive work has gone into assessing the optimum capacity at the point of opening to create the best possible atmosphere for fans and, in turn, supporting the players on the pitch.

“At this stage it is not possible to say if and when any capacity expansion to an absolute maximum of 62,000 would take place.

“That would also be subject to further design work, fan and community consultation and planning approval.”

Stadium architect Dan Meis said: “We know from all of the conversations we’ve had with fans that they want a stadium that is atmospheric, feels like a fortress and supports the players on the pitch.

“They also want the club to be ambitious for the future.

“We believe this proposed approach to design and capacity meets with those aspirations.

“Our design and engineering approach will give us the potential to expand in the future.

“This will be done if and when we are at a stage where it is financially viable and fits with our key principles.”